Chief Tanksley looks back on 3 years with BPD 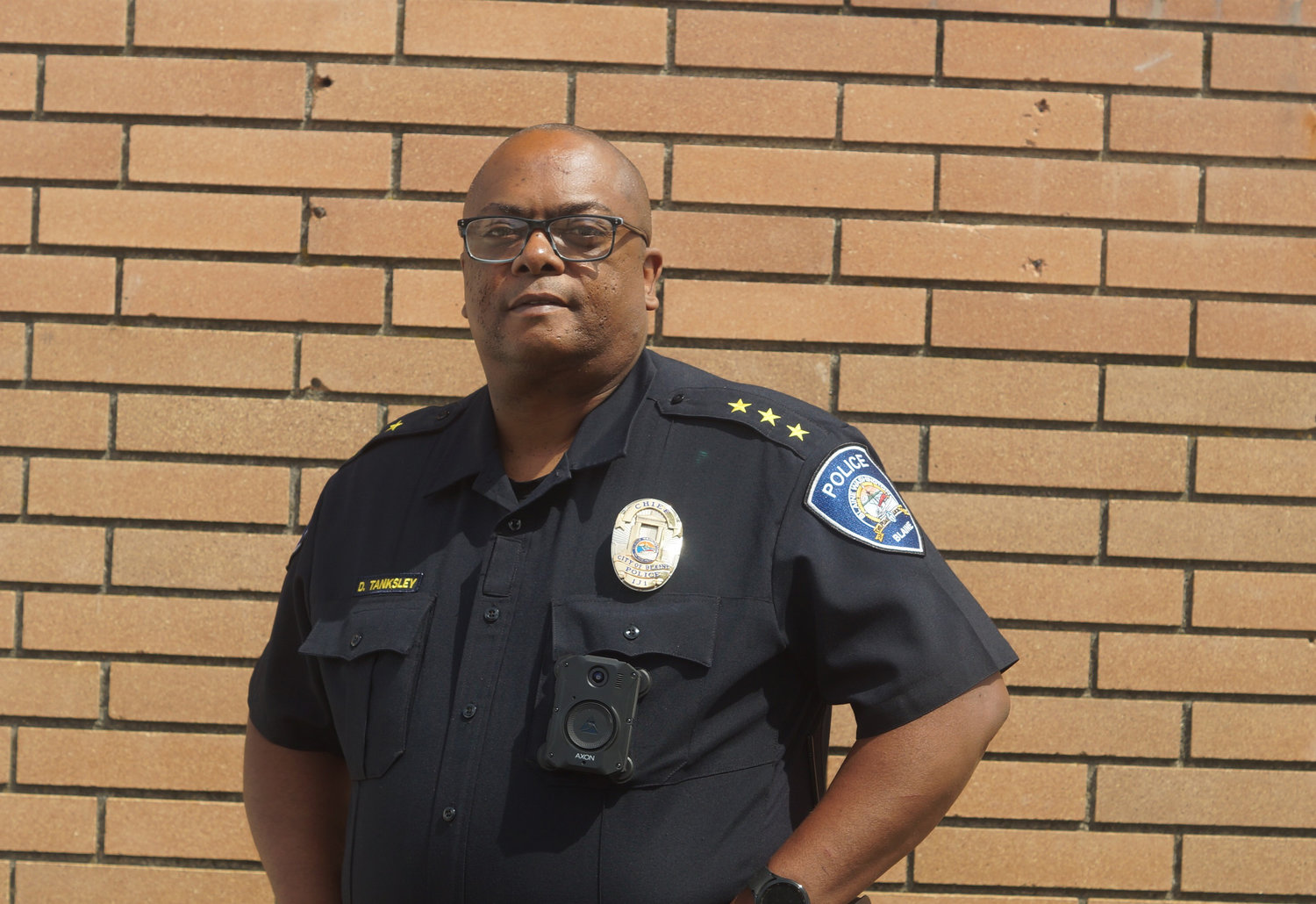 Blaine Police Department (BPD) chief Donnell Tanksley “Tank” celebrated his three-year anniversary serving the police department on June 24. The Northern Light sat down with Tanksley in his H Street office, decorated with toy police cars, mugs from different universities he visited, framed accomplishments and a white board with his top priorities for the department.

Tanksley worked with the St. Louis Metropolitan Police Department from 1993 to 2014, the last seven of which he served as commander. He moved to Bellingham to become assistant chief of police at Western Washington University from 2014 to 2017 and then chief of police at Portland State University before joining Blaine. He’s a 22-year veteran in the U.S. Navy and U.S. Air Force.

The interview has been edited for clarity and brevity.

With three years in Blaine, what does it feel like looking back at everything?

I think we’ve gained a lot of ground in three short years. We’ve had transitions. The team we’ve put together is absolutely incredible. And I’m not saying that because I’m the chief, but they really are doing a good job.

We’ve done professional development, de-escalation, crisis intervention and supervisory training. So we really do take stock in valuing every single person that’s on this team. It doesn’t matter what your particular job is, every person has a role to make this team have success.

What do you see as your biggest accomplishments in the past three years?

When interim chief [Michael] Knapp was here, he brought in the Washington Association of Sheriffs and Police Chiefs and we did the Loaned Executive Management Assistance Program (LEMAP). They examine your department policies, procedures, how you conduct business, evidence, procedures and they give a series of recommendations. I’m proud to say we’re about 90 percent complete with those recommendations.

When I came in, I had zero files in this office. I didn’t even have a thumb drive. I started from ground zero. Being able to have assistance from people who were here ensured the ship sailed smoothly, instead of keeling.

Our vehicle fleet has been updated and that’s something that started before I got here, but I continued that mission. Last year, we got four new vehicles. Technology is changing every day and you have to have the most updated equipment to do your job effectively.

We are in the midst of a staffing study to see if we have enough people to do what we need to do. I believe we are the only agency in Whatcom County that has done this in recent times. It’s done by CRI-TAC, which is part of the International Association of Chiefs of Police, supported by the Department of Justice.

This year, I secured a body camera grant. We received about $28,000 and it’s from the Small Rural and Tribal Body Worn Camera program. We’re assessing how we could use those funds. We’ve been doing a good job of trying to have the best-trained people within the constraints of our funding. The team has been resilient.

A facility that’s able to accommodate the growing needs of the police department. This building was built in 1955 as a post office and retrofitted in 1995 but the city has grown and we still have limited space.

We have a lot of mandated training. For example, officer Katelyn Lyons does Taser instruction. Two weeks ago, she’s sitting at a computer with two officers behind her, huddled going through a PowerPoint, while two other officers are doing other training. You have a small area with cross conversations. The conference room doesn’t have audio or visual technology in it. The challenge going forward is being able to have our community and representatives realize this is an urgent need. This isn’t a want.

What are the biggest challenges for the police department?

One of the challenges is to make sure everyone understands the law and its restrictions. For example, the new pursuit policy that came last year.

The challenge is having people understand what we can and cannot do. The average person might not follow all the different changes in law, but they do have an expectation of what they believe law enforcement should and shouldn’t do. The challenge is educating the officers to make sure we’re following the law, but also educating the community of ‘this is why we didn’t do what you may have expected us to do.’ But also help a community member and find resources. Being a victim of any type of criminality is very stressing, traumatic and it’s heartbreaking.

How would you describe your approach to policing and has it changed over the years?

My approach is certainly victim centered. How do we take care of victims, but also, criminality? The question for me, always is, why did that person do that? How can we get that person support? Because ultimately what we want, even for a person who’s involved in criminality, is to be successful in life, be a good part of the community and not cause harm to other people.

Taking a holistic approach, not just the law enforcement response, but the response to the courts, probation and parole, social services, mental health services and educational opportunities. All of these things intersect in so many ways. My approach is looking at all of it, to see how we could do our best in the areas that we can control, and being able to communicate with other partners to best help victims and people involved in criminality. My approach also revolves around the prevention of criminality.

My goal and hope as the chief of police is to have a very safe, welcoming community. We’re never going to prevent all crime. But having people know that they live and work in a place that is actually safe.

What do you want the public to know about safety levels in Blaine?

At the top of any organizational chart, it shouldn’t be me. It should be the community, then me. We want the community to know that we’re here for them. We’re guardians, not warriors.

Lieutenant Michael Munden is working on a community survey that we plan to send to the community. We really want to know what the community thinks.

Over the past few years, there’s been a lot of discussion about policing and what it should look like in communities. How have those discussions shaped your department?

Especially during the George Floyd incident, people were very critical of police, which they should be. We’re accountable to the people. There’s not an officer who’s perfect. We have to address when there’s something egregious that happens, or something that’s not lawful.

We talk about scenarios and what ifs. I don’t know the answer, I’m going to find it. So having a leader that’s accessible, informed, admits they don’t know everything, but also having a leader who ensures that he or she is also accountable to the people who work for the police department and the community.

What do you like to do in your spare time?

Yard work, reading and spending time with my family. I listen to quite a few leadership podcasts while I’m doing yard work. Right now I’m listening to a podcast called Black and Blue. They feature African American police officers being in blue from all over the country. It’s an interesting thing right now being a person of color, especially in leadership. I’m a member of American Legion Post 7, volunteer as a director for the Whatcom Dispute and Resolution Center and am a board member of Mount Baker Foundation.

Is there anything else you would like to add?

The men and women of the Blaine Police Department, sworn and non-sworn, are so committed to what they do and doing the best job. They care so much about this community. I want people to know if there’s anything they want, need or have a question about to contact us. Never feel like you’re alone. We’re here for you.