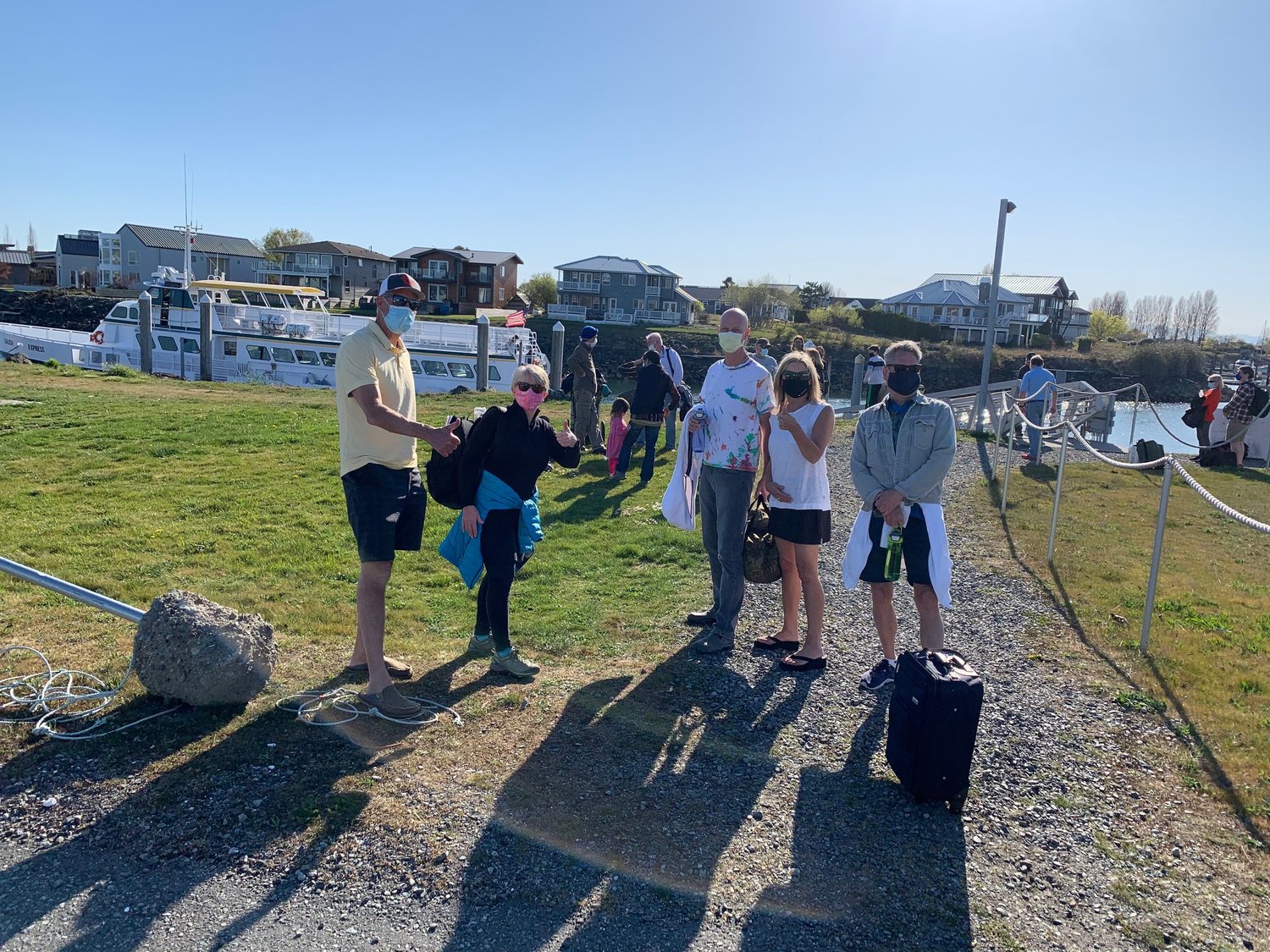 Visiting by ferry, Whatcom Tourism executive director Sandy Ward, second from left, gives a thumb’s up after a day spent touring Point Roberts and talking to local business people and residents about ways to revitalize the local economy.
Photo by Louise Mugar 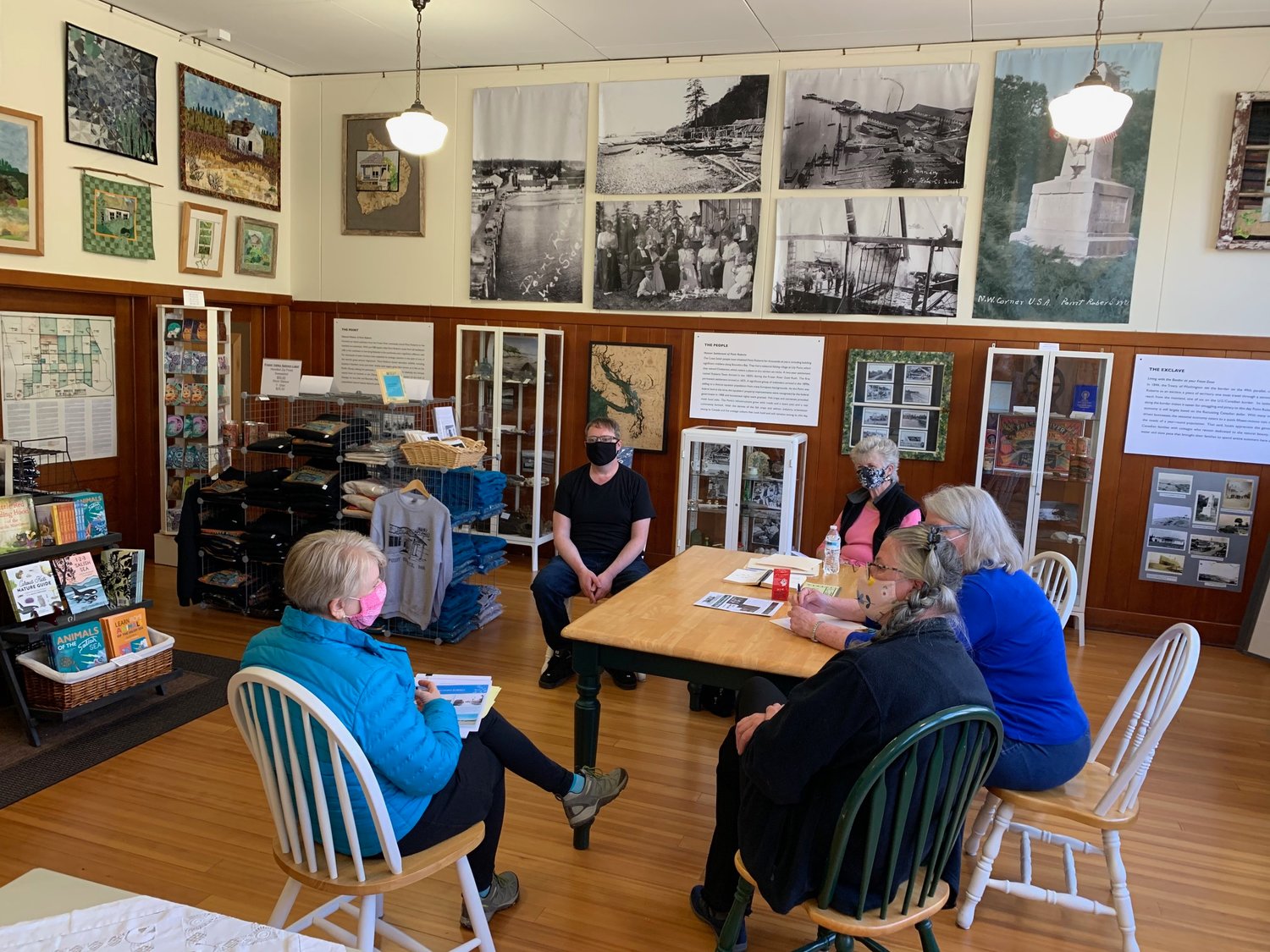 Sandy Ward, CEO and president of Bellingham Whatcom County Tourism, traveled by ferry to visit Point Roberts on April 16. She met with a variety of businesses and organizations to discuss bringing some tourism to Point Roberts this summer from off the Point. Ward, l., spoke with members of the Point Roberts Historical Society at the History Center.
Photo by Louise Mugar
Previous Next
Posted Thursday, April 29, 2021 7:35 pm
By Pat Grubb

Bellingham Whatcom County Tourism president and CEO Sandy Ward recently visited Point Roberts and she apparently liked what she saw: She’s rented a place to stay for the Fourth of July weekend for her and her family.

Ward took the first ferry from Fairhaven on Friday, April 16 and spent the day touring the Point with chamber of commerce director Louise Mugar getting the lay of the land and meeting business owners and residents. She is looking at both short- and long-term ways to help the Point survive the pandemic-induced downturn and diversify its reliance on Canadian visitors.

Asked why someone involved in the business of tourism would care about economic development, Ward said, “Tourism is development. We’re sort of a gateway drug. People first come to visit and they say to themselves, this would be a good place to bring their business.”

She added that in 2019, tourists brought $550 million into the Whatcom County economy and directly and indirectly supported 7,400 jobs.

Ward is involved in trying to stimulate visits to Point Roberts in the spring, summer and fall months and is working with the Port of Bellingham, the county and marinas on an advertising campaign aimed at bringing boaters to the Point, Blaine and Semiahmoo.

Ward has also reached out to the Whatcom Transportation Authority in the hopes of setting up a circulator bus to pick up and drop off passengers throughout the Point. She is hoping to get the county to agree to the funding while the WTA would supply the vehicle. “People have to have a way to get around once they arrive either by private boat or the ferry,” she pointed out. “Travelers want to spend money and they get mad if there’s no place to spend it,’ she said, news that would be music to the ears of local businesses.

Ward said the ferry schedule would change in June to Thursdays and Mondays but would keep the same sailing times. This would allow people to come for long weekends. She has also been talking to Whatcom County parks director Mike McFarlane about opening up Lighthouse Marine Park campgrounds and has received a positive response.

Longer term, Ward is enthusiastic about pursuing a seasonal ferry service between Point Roberts, Blaine and Bellingham. She said there are millions of federal dollars available for transportation, tourism and economic development projects; money that could be used to purchase a high-speed, low-wake passenger ferry.

Also long-term would be a serious look at previously proposed ideas such as the lighthouse project, fishing dock and Gulf Road historical pier.