After 460 days, still no word on when border will reopen 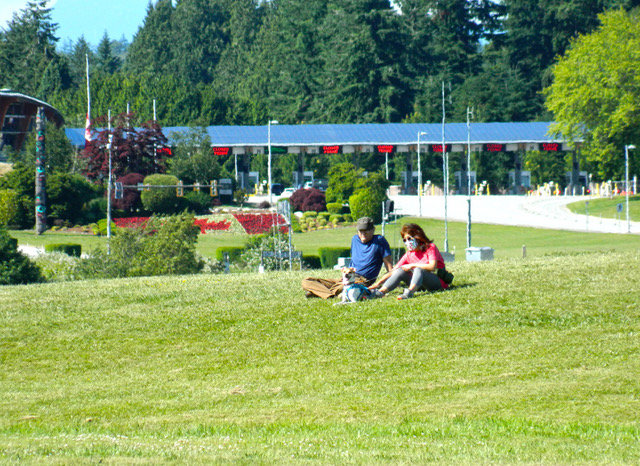 The Canadian flag was recently planted with flowers at the Canadian side of the Peace Arch border crossing near where two people sit June 17.
Photo by Ruth Lauman
Posted Friday, June 25, 2021 1:04 pm
By Pat Grubb

Despite unofficial reports that the U.S. intended to open its land borders with Canada and Mexico on June 22, that day came and went with no change to the status quo, the 458th day since the borders were closed on March 21, 2020. The Department of Homeland Security (DHS) officially posted its intention to extend the closure until July 21, approximately nine hours before the restriction was due to expire at midnight on June 21. The notice was subsequently published in the Federal Register on June 23.

In doing so, DHS followed the lead of Canada which had announced its decision to extend the closure to non-essential traffic on June 18 with a tweet from Canadian public safety minister Bill Blair saying the prohibition against non-essential travel into Canada was being extended until July 21. In a June 20 tweet, the DHS noted positive developments in recent weeks and wrote it was “participating with other U.S. agencies in the White House’s expert working groups with Canada and Mexico to identify the conditions under which restrictions may be eased safely and sustainably.”

Blaine immigration attorney Len Saunders pointed out that the Americans who were held during the Iranian hostage crisis were released on their 454th day of imprisonment, meaning the border closure is now longer than one of America’s most fraught and emotional international crises. “How ironic is that,” Saunders asked.

“I’d be shocked if the border doesn’t open on June 22. Shocked,” Saunders had said on June 15 when asked for an update on the border. Saunders was the source of the May 25 story in All Point Bulletin that broke the news nationwide that the U.S. was preparing to open the border on June 22 on a unilateral basis, if necessary.

That story related how he had been told by multiple local CBP officials that while there was no “official” directive, the Blaine sector had been told to get ready to open the gates on June 22. Since that time, there had been changes in traffic routing and a bevy of new officers being trained in the inspection booths. The ubiquitous and obligatory zapping of vehicles, drivers and passengers by the drive-through X-ray machine had also stopped with most vehicles directed to the nearest exit.

In response to the border extension, New York congressman Brian Higgins had this to say: “There’s no other way to say it: another month’s delay is bullshit.” Higgins has been a strong proponent of reopening the border and is co-chair of the Canada-U.S. Interparliamentary Group On Continued Extension Of Border Restrictions. The group released the following statement:

“Millions of Americans and Canadians are counting on our governments to work together to reach an agreement that provides a clear roadmap for reopening the border between our two nations. The lack of transparency surrounding these negotiations is a disservice to our constituents and the millions of residents on both sides of the border waiting to see their loved ones, visit their property, and renew business ties. While the arrival of vaccines in record time has been a modern marvel, the inability of the U.S. and Canadian governments to reach an agreement on alleviating border restrictions or aligning additional essential traveler classes is simply unacceptable.”

Other politicians on both sides of the border were quick to endorse Higgins’ opinion and urged both governments to quickly release the criteria under which the border would be re-opened. The Canadian government has been especially vague and fluid in its position on reopening the border. Prime Minister Trudeau had said border restrictions would be relaxed once 75 percent of Canadians had received at least one vaccine dose and 20 percent were fully vaccinated.

On June 21, the Canadian government announced it would allow fully vaccinated Canadian residents to forgo the previously mandated 14-day quarantine. As of July 5, returning Canadians will still need to submit electronically proof of vaccination, a negative test result taken 72 hours ahead of arrival, not have Covid-19 symptoms and take a test on arrival.

The increasing number of vaccinations in both the U.S. and Canada has state, provincial and federal politicians calling upon the Canadian and U.S. federal governments to reopen the border.

Marketplace in danger of closing

“The lack of practicality of these American citizens to cross over our international border to access basic necessities, their American property, loved ones and medical care is of grave concern,” Rule wrote.

In the letter, Rule highlights that Point Roberts’ only grocery store is in danger of closing. Ali Hayton, the owner of International Marketplace, has announced she will be closing the store on July 15 due to continued heavy losses. Other representatives such as U.S. congresswoman Suzan DelBene (D-WA) have called for help to Point Roberts and other border town communities.

Congresswoman Suzan DelBene (WA-01) sent a letter on June 23 to U.S. Secretary of State Antony Blinken calling on the Biden administration to reach an agreement with the Canadian government to grant the Point Roberts community an immediate exemption to current border restrictions and reopen the Boundary Bay border crossing.

“The status quo is simply unacceptable. Leaders ultimately bear responsibility for the hardships faced by members of the Point Roberts community,” wrote DelBene. “We must act quickly to reach an adequate and safe solution before it is too late. I respectfully request that the United States and Canadian governments immediately grant the community of Point Roberts an exemption to the current border rules and reopen the Boundary Bay border crossing.”

Whatcom County Executive Satpal Sidhu advised council that he had “met with the owner Ali Hayton last week when I visited Point Roberts. We were very hopeful that the border [would] open on June 22nd but it did not. The Port of Bellingham received $100,000 from the U.S. Departmen of Commerce for helping small businesses with $25,000 grants. The Port shall be sending these grant funds to the grocery store soon.

“I had another conversation with the owner today and we discussed a possibility of them providing “meals on wheels” service in Point Roberts, which can be funded with Whatcom County funds. I have asked her for a proposal with some details. I will share that with you once I receive such a request. She feels this service can keep her employees busy and on the job.”