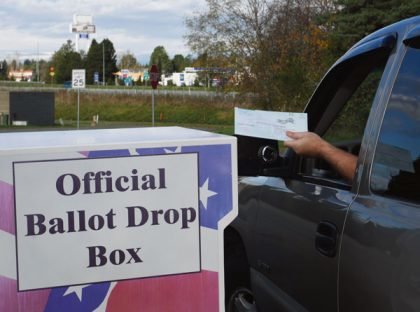 The ballots should be delivered by Friday, July 23, but if they’re not, Whatcom County auditor Diana Bradrick says people should contact the auditor’s office for a new ballot.

Primary ballots have a fair number of offices in Whatcom County up for election including Blaine City Council and Whatcom County Council. North Whatcom Fire and Rescue, also known as Fire Protection District 21, has a ballot measure for a property tax levy.

Bradrick said the year following a presidential election typically yields a lower voter turnout, but she hopes voters will follow the record-breaking voting trend of 2020.

“Please vote,” Bradrick said. “Return your ballot and get it returned on time. You don’t have to vote for everything.”

Although people don’t need to schedule an appointment, the auditor’s office recommends people either call or email the office before visiting. Masks and social distancing are required.

A voters’ pamphlet with candidate information was mailed to households July 12.

Primary ballots need to be mailed and postmarked by August 3 or placed in a ballot drop box by 8 p.m. August 3. Drop boxes are located at Blaine Library, Custer Elementary School and the North Whatcom Fire and Rescue parking lot at 4581 Birch Bay-Lynden Road.

The auditor’s office can help people register to vote or change their address until 8 p.m. August 3 but voter registration and address changes must be done online or received by mail by Monday, July 26.

An accessible voting unit in the auditor’s office can assist voters needing visual and audio accommodations through Election Day.

The top two candidates for each race will go onto the general election on November 2.

People who want to register to vote and have their Washington state driver’s license or ID can register to vote on votewa.gov. People already registered to vote can visit votewa.gov to check on their ballot status, access personal voting information and update voter registration among other things.