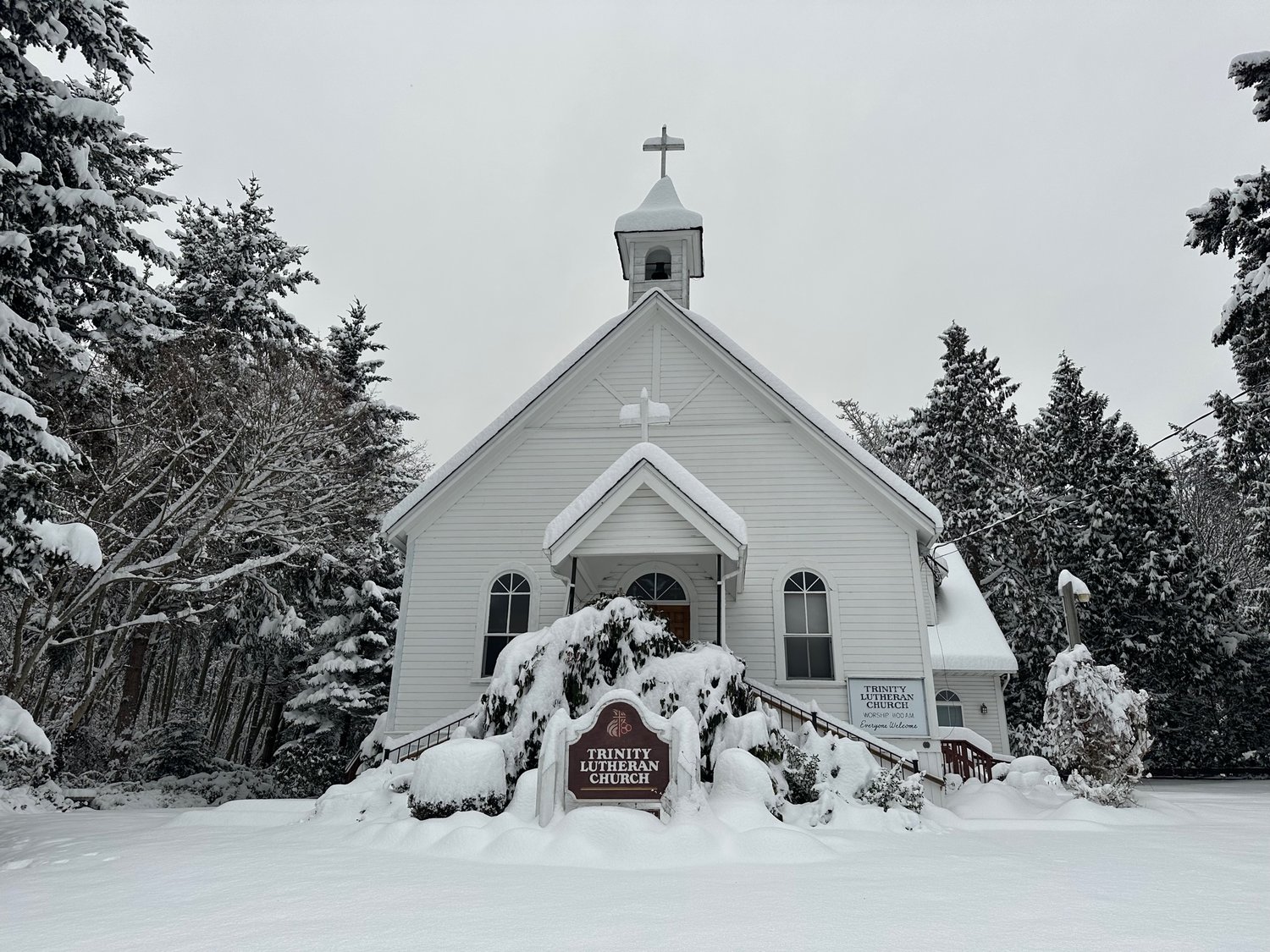 Trinity Lutheran Church on APA Road sat still and quiet on Tuesday, December 20 following a heavy snowstorm that struck the Pacific Northwest. The community is invited to Christmas services on December 25 at 11 a.m.
Photo by Louise Mugar
Posted Friday, December 23, 2022 9:15 am
By Gina Gaudet

Happy New Year to all! This is a January column but, being written before Christmas, hopefully, readers are still open to some Christmas reflections.

The Sunday sermon of December 18 looked at the story of Joseph, the earthly father of Jesus. His story is found in Matthew, which we’ll read from throughout this year. Luke was last year’s gospel-writer, and his story focuses on Mary, the mother of Jesus.

The two stories, by different authors from different religious backgrounds, together offer a full and rich depiction of the redemptive work of God through very human relationships to divine principles.

Some background to these stories: the Jewish people at the time of Christ live under Roman rule, a cruel oppression. Part of the nativity story is its setting in a time when Roman rulership demanded a census of the Jews for taxation purposes.

Mary receives a visit from an angel announcing that she is going to give birth to God’s own son, who will be a messiah, anointed savior of God’s people. Pastor and commentator Diane Butler-Bass makes the point that, before she was a madonna, Mary was actually a prophet. Having been told that she will bear the son of God, she visits her cousin Elizabeth, who is also pregnant. When Elizabeth greets her cousin with her own acknowledgement that Mary is to be the mother of the lord, Mary breaks into song praising God. God has seen the humble station of this young woman and blesses her beyond any human imaginings. Through her son, God has, “put down the mighty from their thrones, and exalted those of low degree; he has filled the hungry with good things, and the rich he has sent empty away.” This up-ending of the current Roman social order sits firmly in the prophetic tradition of the old testament. Mary and her fiancé Joseph are chosen to be the protectors and parents of the savior of God’s people.

Joseph’s story comes from a different source, with a different focus and different set of social protocols to be overturned. Both gospel writers include in their stories a genealogy of Jesus; Luke, a gentile and a physician, takes Jesus’ genealogy back to Adam, the first human, thus presenting Jesus as a universal savior, of all nations (Luke 3:23-38). Matthew, a Jewish writer, traces Jesus’ origins back to Abraham, the father of the nation of Israel (Matt. 1:2-17). Jesus’ earthly father is Joseph, a descendent of David, the greatest of the kings of the old testament.

Joseph is a member of the royal Davidic line. and is described as a righteous man. In other words, he knows the law. And the law is God’s gift to his people, the guidebook to being civilized in a relatively lawless world. It should be understood that, at this point, the laws of that time were very strict, with sometimes brutal consequences, and some were specifically pertinent to the role of women in the social order.

Joseph has just received his own epiphany, informing him that his fiancée is pregnant and will bear a son. By rights, Joseph can have his bride-to-be publicly stoned to death for this violation of the law of Moses. It is the righteous thing to do. But the wise and compassionate Joseph resolves instead to quietly end the engagement and move on with his life. Not exactly the righteous choice, but at least the right one.

It seems here that, based on his decision, he gets his own angelic visitation to assure him that this child is indeed God’s own miracle, and Joseph is now in on the divine plan.

I find it significant that these parents did not receive their angelic messages as a couple. Their stories are separate and unique. Mary’s epiphany is not dependent upon her engaged status, nor is it given through her husband, as would be expected within the middle-eastern culture of the time.

Joseph receives a message that initially puts him in an uncomfortable legal and ethical position. And when he finally gets his epiphany, he is told to “not be afraid” to take Mary as his wife. One can see that he would be putting his reputation on the line here, and is perhaps being challenged to choose love over law.

These stories are the beginning of a greater story that changes the world. Yet they are stories of two people called to higher destinies as individuals, one called to prophesy the overturning of the status quo, the other called to surrender righteousness to rightness, and law to love.