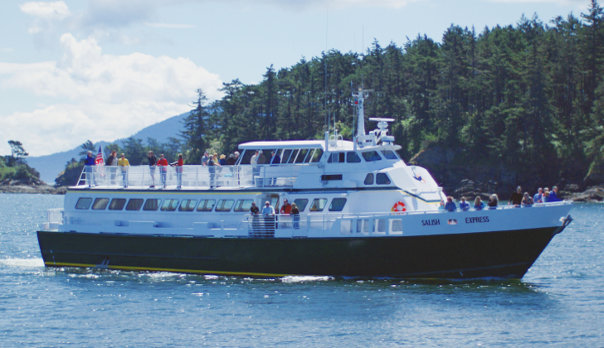 A temporary ferry service operating between Point Roberts and Blaine will begin Tuesday, August 25, according to Port of Bellingham executive director Rob Fix. Transportation to and from Bellingham will be provided by the Whatcom Transportation Authority (WTA).

In a press release issued August 20, the Port announced the once-a-week ferry service will be offered free of charge on a first-come, first-serve, advanced-reservation basis. A transit connection from Blaine Harbor to Cordata Station in Bellingham will be provided by WTA.

Face masks are required on both ferry and WTA connections, and the number of passengers will be limited. The initial ferry schedule is shown below.

There are people who are concerned that implementing ferry service will make ongoing negotiations with Canada on easing transit between the Point and the rest of the U.S. more difficult. “I don’t think a ferry will help with solving the land crossing issues,” said Point Roberts fire chief Christopher Carleton in an August 18 telephone conversation with All Point Bulletin. “It just gives Canada a chance to stonewall,” he added.

Carleton points out that a ferry is just a temporary solution at best, given the huge expense and limited window provided by summer weather conditions. “These are decisions being made by people who don’t know our community,” Carleton said. Previously, Carleton spoke about the demographics of the Point being non-conducive to ferry service due to age and limited income of a significant proportion of the Point’s population.

Asked if the Port of Bellingham leadership was concerned about the fears that a ferry service could jinx negotiations, Fix replied, “We reached out to the federal delegation and inquired about this affecting long term negotiations. They didn't think it would affect the border issue and thought this was a great short term solution. The emphasis is on ‘short term solution’ because it just isn't financially feasible to do this long term. A border solution must be found and everyone recognizes that.”

Governor Jay Inslee was asked if he had heard from Whatcom County and Point Roberts about the problems faced by Point Roberts during a media briefing held August 20. “I have not spoken to those communities and I probably should listen to see if they have any ideas,” Inslee replied.

“We’re at the mercy of the federal governments on both sides of the border largely on this. You raise something that I should look into and I will ask them if they have any creative ideas.” After pausing, Inslee carried on, saying, “I was just told that our staff has talked to them although I have not done so personally.

“The last time I spoke to the British Columbia leadership we could not think of a way to solve this problem. That was two or three weeks ago. At the moment, I don’t have a solution but we should all try to find one,” he concluded.

An informal online ferry survey created by the APB had 448 responses as of August 20. A majority of respondents were either extremely likely (52.7 percent) or very likely (16.9 percent) to use the ferry. Friday and Saturdays were the most popular day and most people would want to take the ferry at noon or 7 a.m. Not everyone was on board the ferry idea, however.

Another one wrote, “Spend your energy working with Canada to open the border to Point Roberts residents. With Covid-19, who wants to take a mass transit bus and rent a vehicle when they arrive [in] Bellingham? Certainly not an immune compromised individual.”

Others were more appreciative. “This is great! Not only will it help residents not be completely isolated but it will also help reduce the amount of traffic at the border and on the road. Although I can't see myself using it a whole lot as I don't go to Blaine very often now, it would have been great when my kid was in school over there. Thank you so much for offering it! We really, really appreciate it!