As expected, the Point Roberts Hospital District issued a Request for Proposal (RFP) to operate a general practice medical clinic on July 1. It was reported in the July issue of the All Point Bulletin that the district had decided against allowing the existing contract with the current service provider, Bellingham-based SuperTrack Urgent Care, to automatically renew for a one-year term on January 1. Accordingly, the district was required to notify SuperTrack in writing of their decision prior to July 1.

The district took action after being approached by Deb and John Shields who told commissioners during their regular June meeting that they had formed the Shields Company and wished to become the service provider for the district. At that June 9 meeting, Deb Shields described a variety of services their company could provide local residents. Until recently, Shields, a physician’s assistant, was one of two medical service providers working at the clinic.

Commissioners have scheduled an aggressive timetable for potential service providers. Those interested in operating the clinic have until July 15 to request information to prepare responses/notice of interest, and must submit proposals and supporting documents by 4 p.m. Friday, July 31. If more than one bid is received, the commission expects to decide upon the winning bid shortly thereafter.

In mid-2018, the district issued a statewide notice seeking a service provider after its then-provider, UnityCare, notified the district it intended to stop serving the community at the end of the year. The district’s 2018 notice sought a provider interested in providing “primary and urgent care” while this year’s RFP describes the clinic as a “general practice medical clinic.” The district received no response to its statewide advertising; SuperTrack ended up becoming the service provider after it was contacted separately by Barb Wayland, the district superintendent. Wayland reminded commissioners that no large medical systems were interested in running remote clinics at the  commission’s special meeting held June 20.

The PDF version of the RFP can be downloaded by clicking here, or it can viewed below: 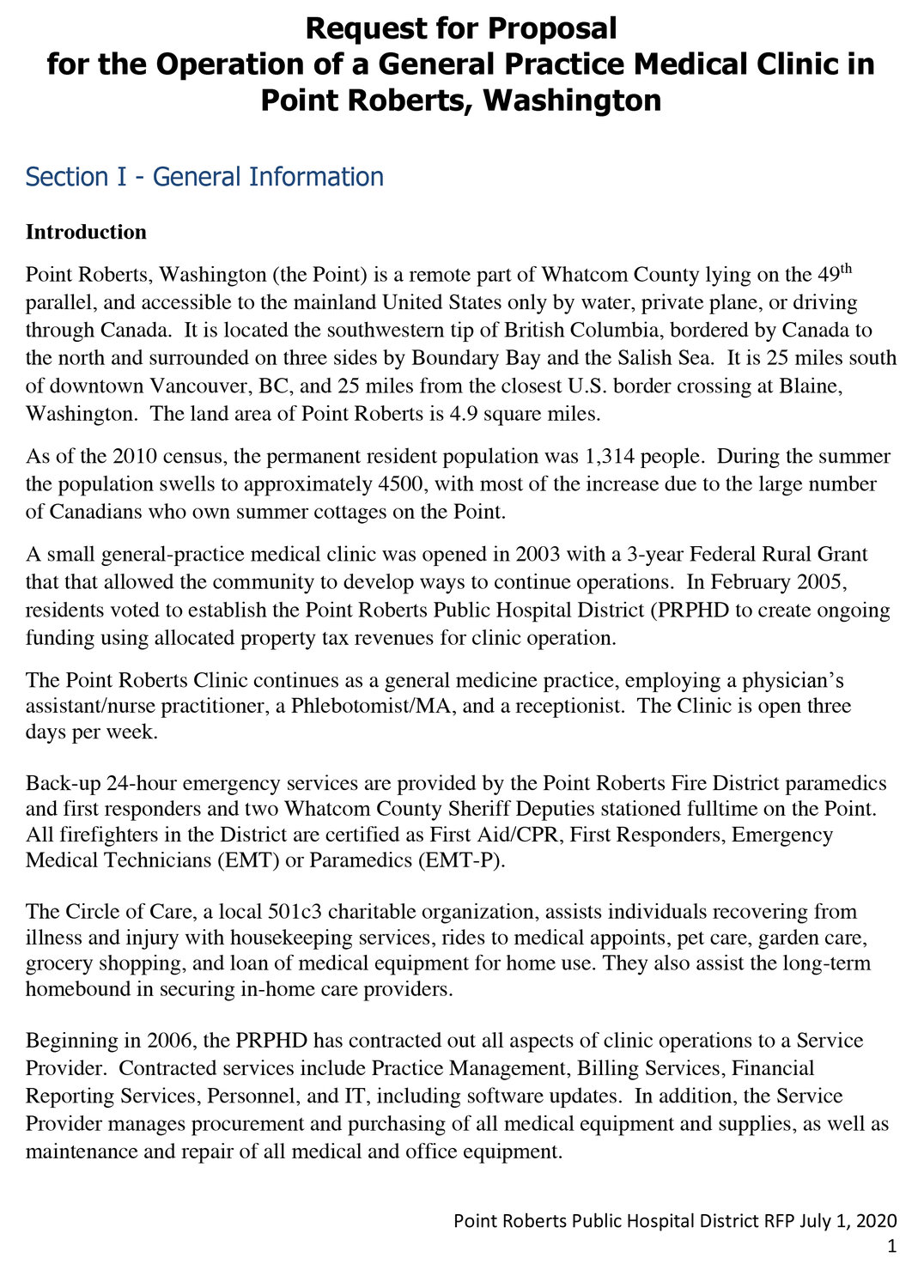 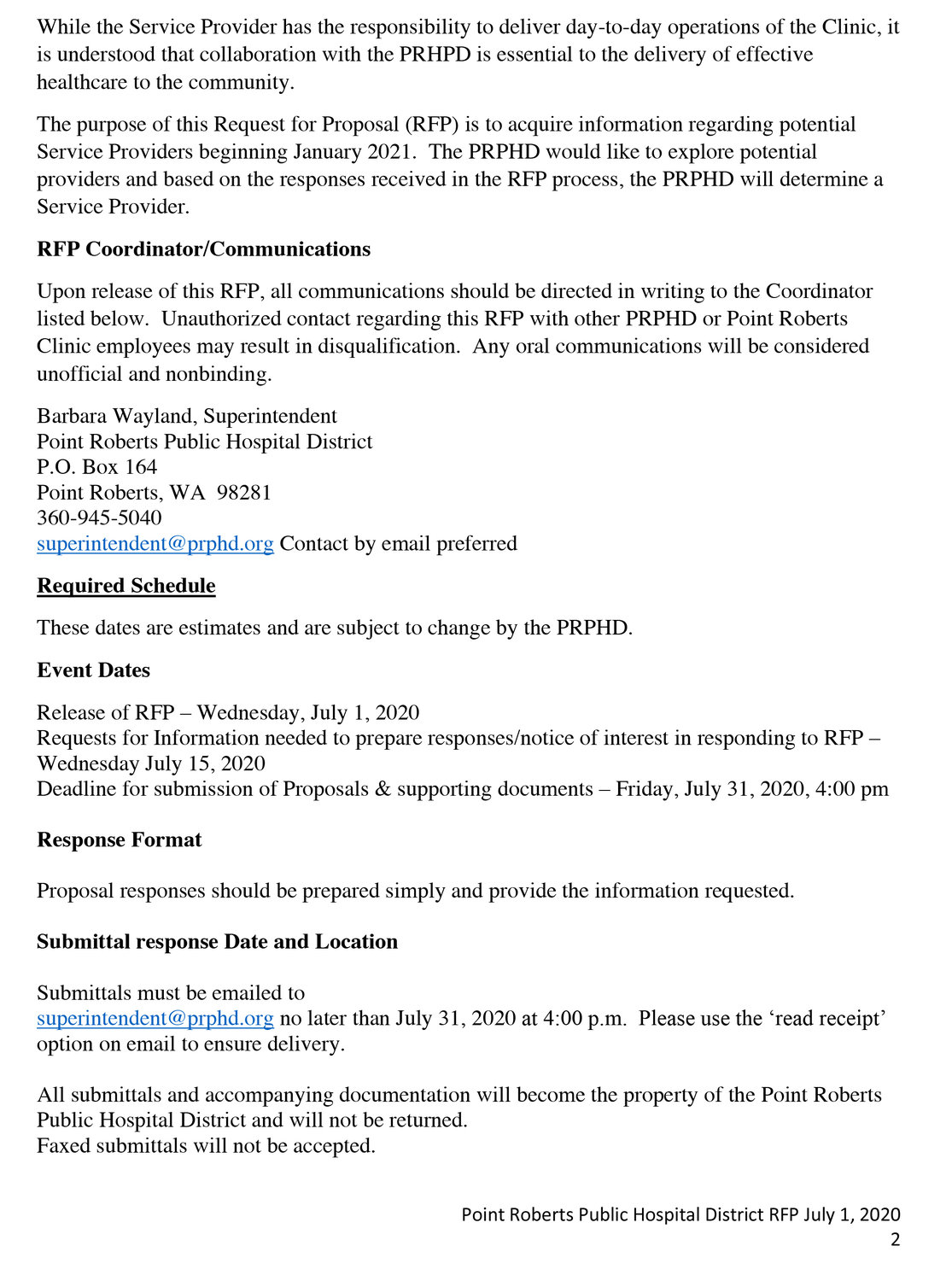 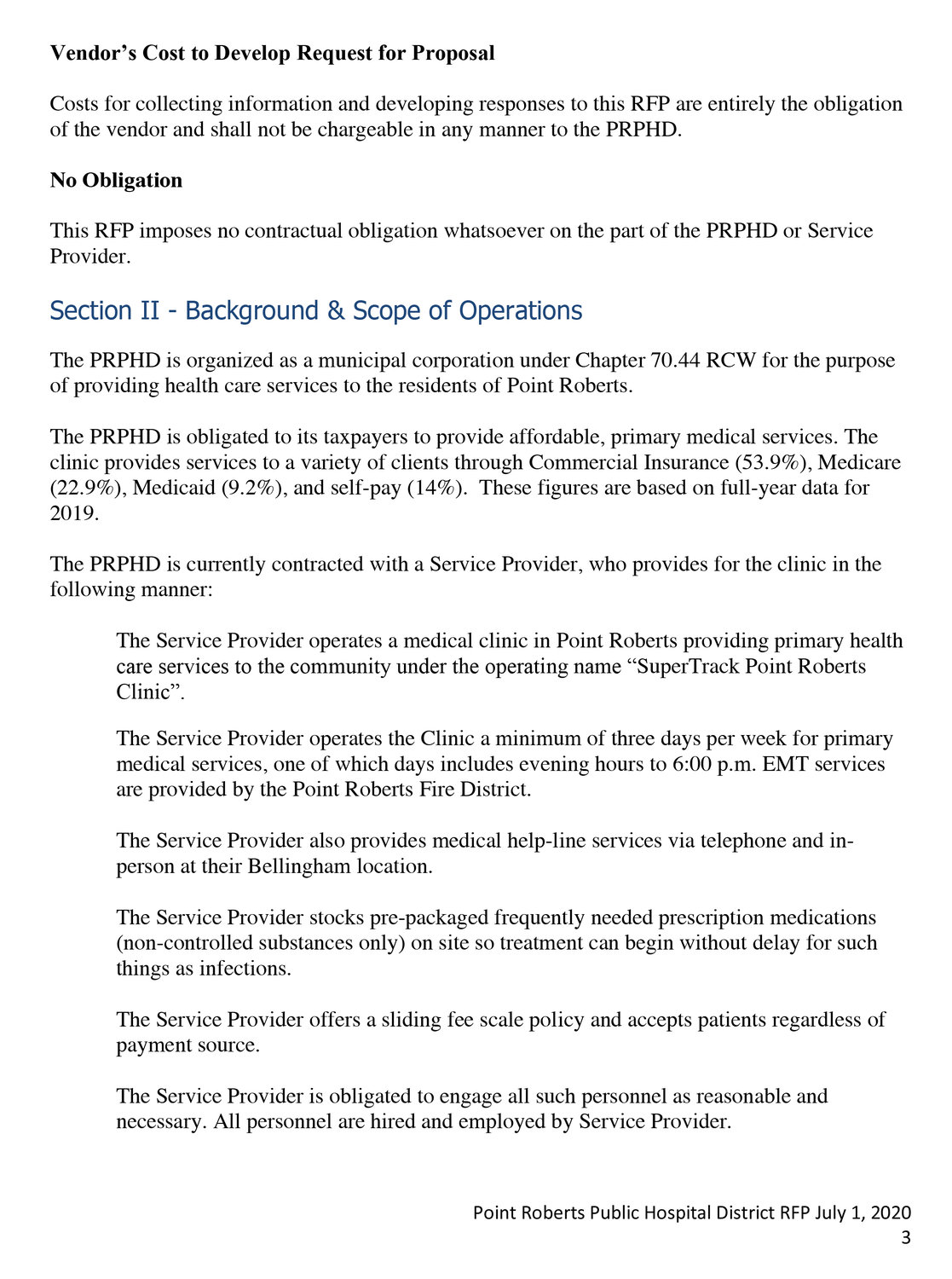 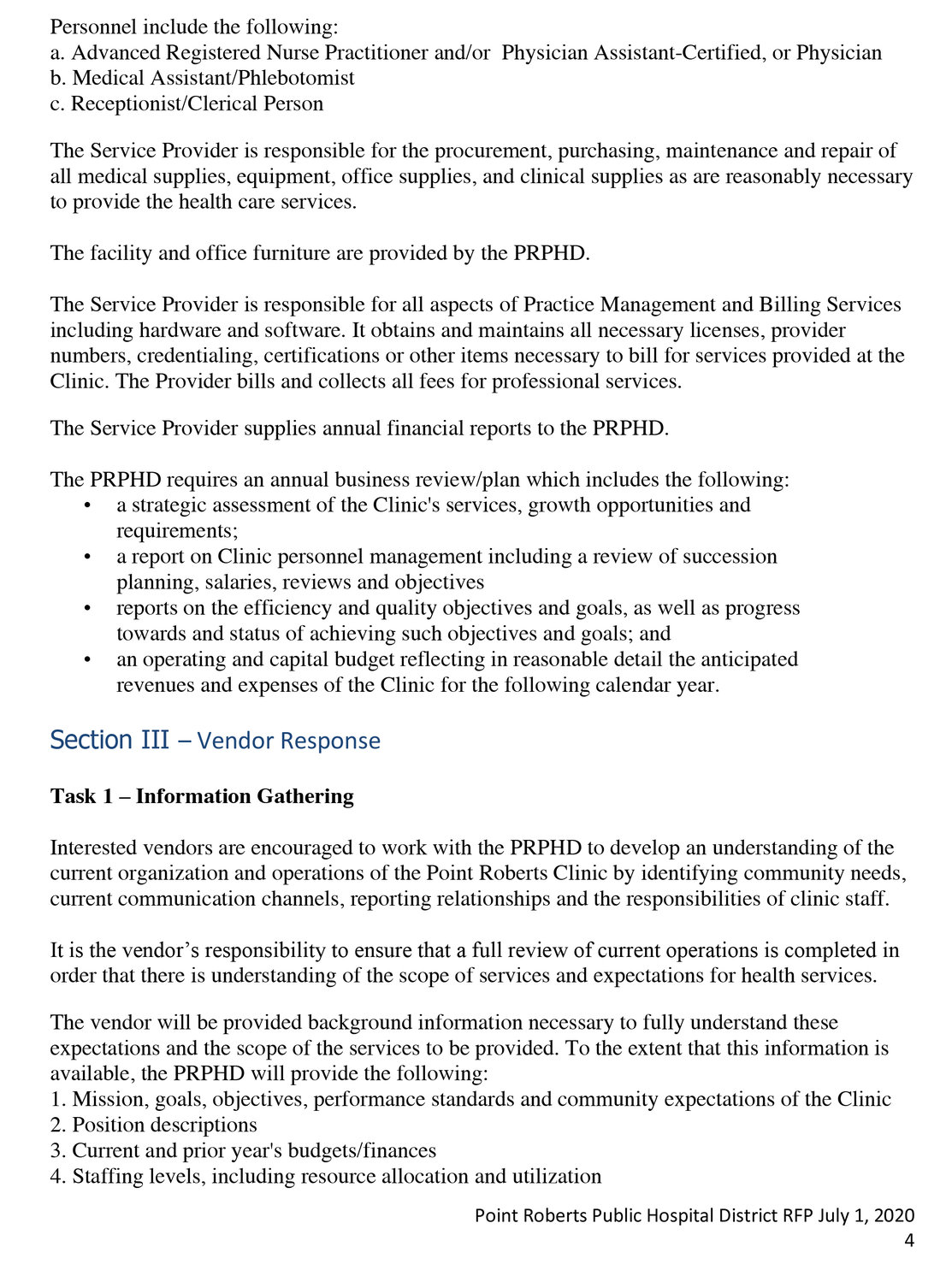 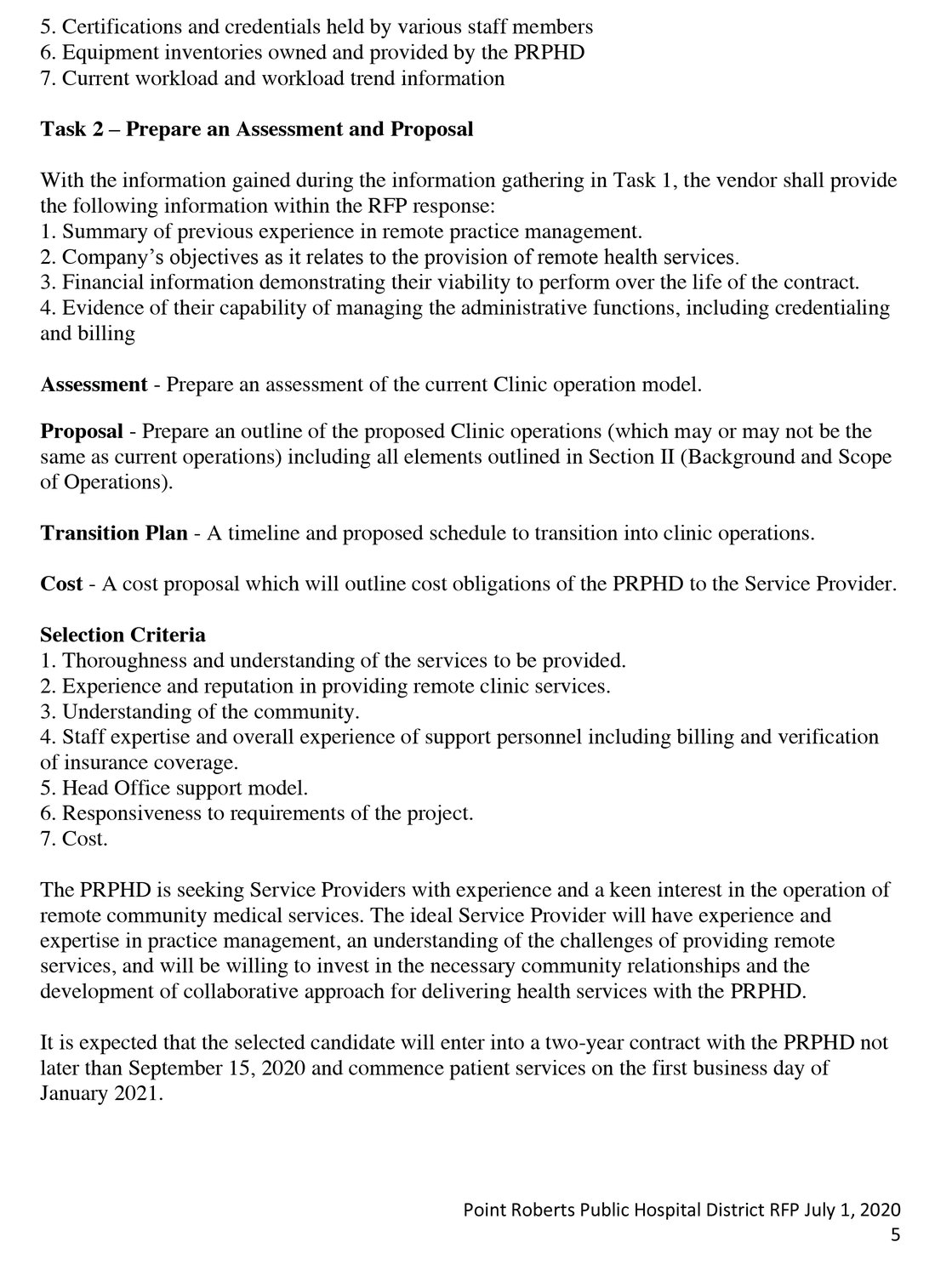 Fire chief calls on Trump and Trudeau to intervene

How to spend a summer evening...