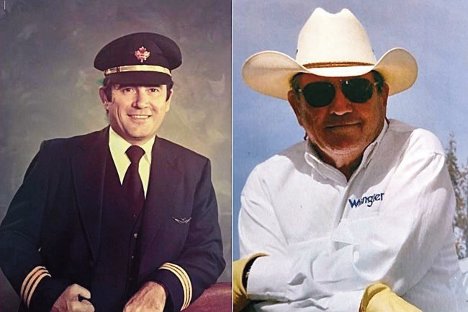 Dwayne (also known as Pappy, Montana and Mad Dog to name just a few) went to the big ranch in the sky on April 26 in White Rock at age 88.

Dwayne was a true cowboy originally born in Ponteix, Saskatchewan to Marjorie and Worth Hunt. After rodeoing around Alberta he decided to try his hand at flying. Starting off with Shell in the Arctic, he then moved on to bigger equipment. Dwayne spent his entire career as a Flight Engineer working for some of the best airlines around the world: British Caledonian, Middle East Airlines, Wardair, Singapore Airlines and finally retiring from Polar Air Cargo in his 70s. He loved rodeos and he loved flying.

He and his wife Virginia-Lee Hunt (predeceased in 2012) had a grand adventure over their 55 year marriage and spent their last years together living on the beach in Point Roberts, Washington. Dwayne loved their home on the beach, crabbing and boating.

Dwayne will be missed by his daughter Kari Grist (Mark), son Rob Hunt (Christi) and his three grandchildren, Madison, Jesse and Hannah. They will especially remember the waffles and ice cream that he made them for breakfast. He was Great-Grand Pappy to his first great-grandson, Asher who he had just met. He will also be missed by his sister Sherry Everett of Tsawwassen.

A celebration of life will be held on Saturday, May 28 at 2 p.m. at Boundary Bay Airport, Apron 3, Hangar 13. As this is a restricted area, if you are attending, please RSVP to rememberingdwayne@gmail.com for further information.

“Welcome to heaven cowboy, your entry fees are paid”