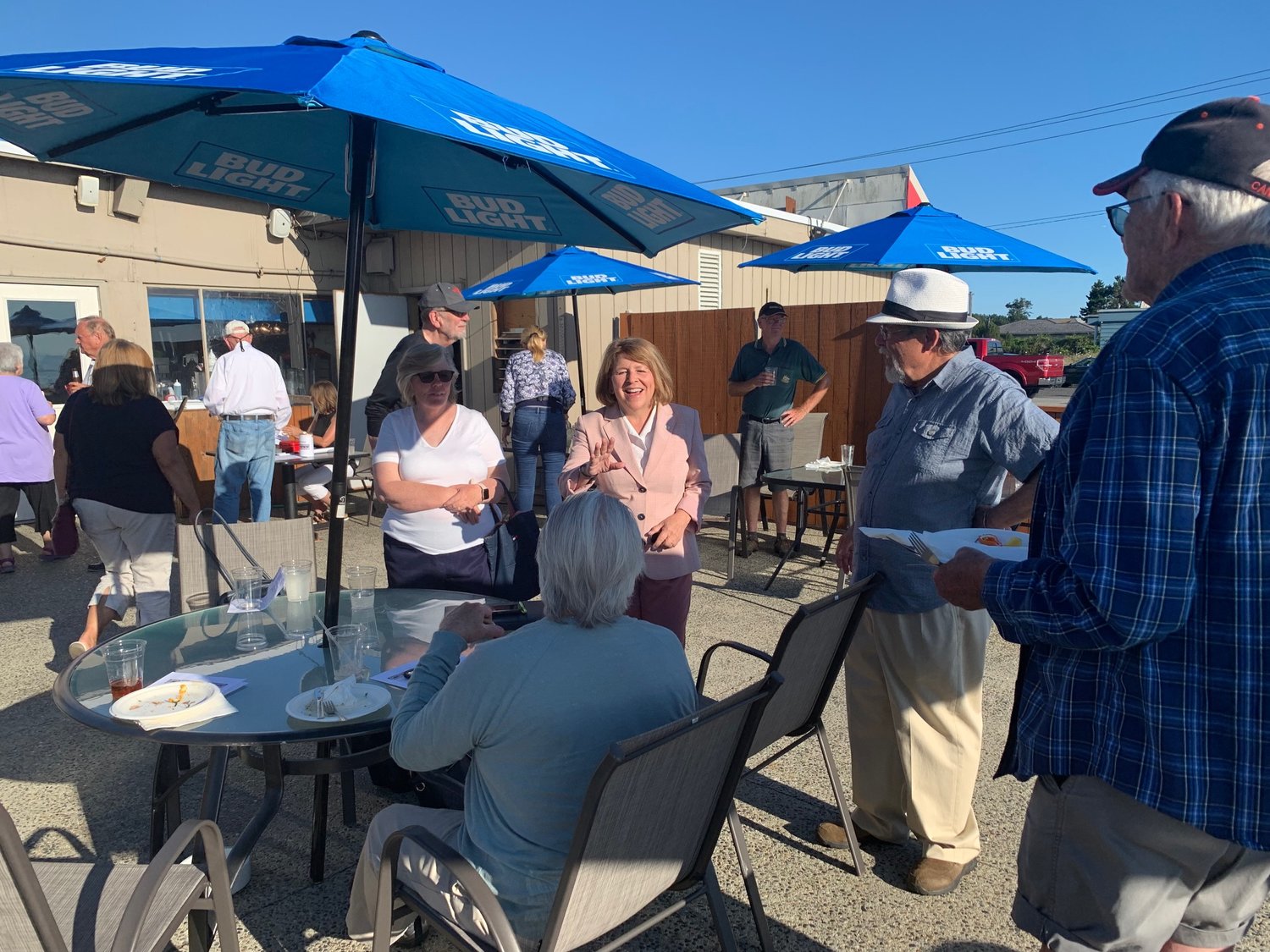 Lisa Brown, director of Washington state department of commerce, was the featured speaker at the Point Roberts Taxpayers Association’s annual general meeting on July 21. Among other issues, Brown discussed how communities such as Point Roberts could successfully emerge from the pandemic.
Photo by Louise Mugar
Posted Friday, December 23, 2022 9:15 am
By Mark Robbins

During the past year, the Point Roberts Taxpayers Association (PRTA) met monthly via Zoom with the exception of the in-person annual general meeting (AGM), held outdoors at Kiniski’s Reef Tavern. PRTA continued to actively support the Point Roberts Community Advisory Committee (PRCAC) as the primary mechanism for pursuing improved services to our unincorporated community.

In January, PRTA held a virtual special meeting of the membership via Zoom to approve changes to the association’s articles of incorporation in order to bring them in line with current by-laws, which have been updated from time to time without noting some inconsistencies. The most important action was to affirm that PRTA membership is open to any full-time legal resident of Point Roberts (even if they do not own property) as well as to resident and non-resident property owners.

The AGM was held on July 21. After two years of virtual AGMs, it was exciting to once again welcome a keynote speaker, Dr. Lisa Brown, director of the Washington State Department of Commerce, who spoke on economic recovery and making communities like Point Roberts thrive. Dr. Brown was accompanied by state representative (and now state senator-elect) Sharon Shewmake, who participated actively in the Q&A. We belatedly marked our 50th anniversary as an association, first incorporated as the Point Roberts Community Association in 1970 (name changed to Point Roberts Taxpayers Association in 1990).

On September 6, PRTA hosted the 9th consecutive annual town hall meeting with our member of congress, Suzan DelBene. We bade farewell to Ms. DelBene as our representative as a result of redistricting that moved Point Roberts to the second congressional district, represented by Rick Larsen. We will seek to establish a similar townhall tradition with representative Larsen in 2023.

Through the vision and perseverance if one of our directors, Samantha Scholefield, PRTA received a $5,000 grant from the Whatcom Community Foundation aimed at promoting a sense of community through the enjoyment of the Point’s many free outdoors attractions. Informational and promotional materials will be developed, and selected activities sponsored. So far, PRTA’s Free on the Point program has conducted a Lily Point Walk and a nighttime Holiday Bike Ride. PRTA is grateful for the financial support provided by the Whatcom Community Foundation.

Year in Review: Point Roberts Friends of the Library