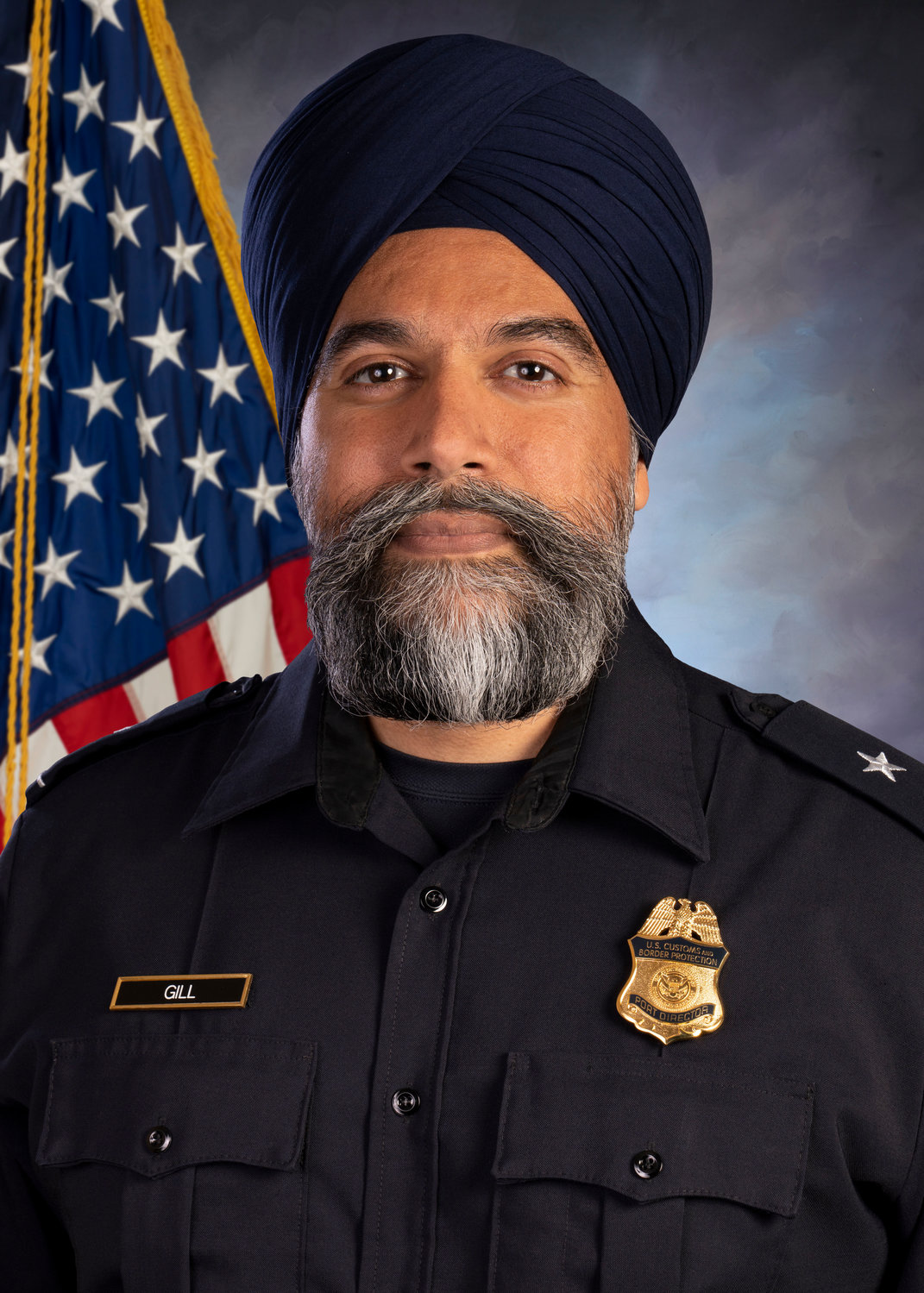 U.S. Customs and Border Protection (CBP) promoted Harmit Gill to serve as the Blaine area port director at the end of March. The Northern Light sat down with Gill to discuss what he hopes to accomplish in his first year, how he’s improving transparency within the agency and his background growing up in Blaine.

Gill moved from California to Blaine in sixth grade and attended Blaine schools before earning his bachelor’s degree in computer science at Western Washington University. He worked as a systems analyst at Microsoft in Seattle before returning to Blaine to start his career at CBP. Previous to his new role, Gill worked as chief of staff for CBP’s Seattle Field Office since 2019.

As Blaine area port director, Gill oversees 17 ports and stations on the border of Washington state and B.C. as well as a general aviation facility and seaport operations in Bellingham, Anacortes and Friday Harbor. He is in charge of 700 employees who process over 17 million travelers and $20 billion in commercial trade annually.
Questions and answers have been edited for brevity and clarity.
Can you tell me about your background and experience growing up in Blaine?
I’ve had a challenge in these communities. I came to Blaine in sixth grade and graduated in ’96 but Blaine wasn’t diverse. I may have been the first child to wear a turban and it’s always challenging to be different. Being different here wasn’t easy because people would make assumptions about what religion I belonged to and they liked to display that in outbursts.
Western was good. I graduated in 2004 and transitioned here in 2008. My family has always been in Blaine since we first moved. I started with CBP in 2008. I spent a few months working for the city of Blaine when I graduated high school doing IT work, I worked for a startup company while I was going to school in Bellingham. I wasn’t really into activities, just being mentally focused on what my goal is and trying to accomplish it.
How did you get involved in CBP?
When I left Microsoft, my family was building homes here. One of the homes we sold was to a CBP officer and out of casual conversation, he said, ‘You should work here.’ It piqued my interest. It’s a good career. It’s one of the few jobs that gives you a 20-year retirement pension. It gives stability and in 2006 my first child was born. I have two daughters and one son; 15, 13 and 10.
What has your career with CBP looked like and what positions have you held?
My journey was as an officer to supervisor, chief, chief of staff for the director of field operations at the Seattle field office before I took on this role. I worked in Point Roberts for a couple of years, so I’ve been fortunate to stay in this area.
What position did you hold in Point Roberts?
I worked as a supervisor [in 2015]. Point Roberts has a good place in my heart. That’s where I got my management experience. Not only that, Point Roberts is very unique and they have significant challenges. I relate to the community. We have a lot of conversations with our counterparts in Canada about the community and what we can do to assist them. Point Roberts continued to be our second busiest in the area port of Blaine for traffic during Covid.
Can you explain more about the challenges of Point Roberts and how you want to overcome them?
Point Roberts is political. They heavily depend on their counterparts from Tsawwassen, Richmond and Vancouver. As a federal entity, we don’t dictate what Canada can and can’t do. We can make requests with our counterparts to see if international affairs are able to have communications with them. We’ve spoken with Congressional delegates to see what CBP is doing. We don’t create the rules, we enforce them, but we also empathize with our communities.

I often will verbalize in closed meetings that sometimes I wish Canada would allow Point Roberts a little more leniency. All we can hope to do is engage, have a good working relationship and hopefully they’ll understand. If we’re communicating, we’re able to start that dialogue and bring an issue to a larger focus because if everyone stayed quiet, Point Roberts would still be struggling.
Are there plans to update the computers in Point Roberts?
Yes, it’s a single focus of mine. We could upgrade the computers, that’s not an issue, but it’s the internet connection that poses significant challenges.

It’s out-of-the-box thinking right now, not only for Point Roberts, but for eastern Washington ports to see if we can get advancement in internet access. A lot of the locations are remote and the infrastructure doesn’t exist. We’re doing the best we can but these basic technology essentials are on our books and I hope to get those upgraded before the end of the fiscal year.

My door is open to any concerns the residents have. We recognize those folks have to travel twice through the ports of entry, and it’s not easy.
What do you want to have accomplished by the end of your first year as director?
My main focus has been improving officer morale and professionalism. We are making progress even in the first three months. There’s a lot of stress involved when lobbies are full of people, traffic is backed up for hours and the traveling public is looking at you. My goal is to make sure officers have the tools necessary to do their job, but not working them so hard they’re missing the details.
The jobs we do are a fine line of customer service but, at the same time, you don’t know who you’ll encounter. In the last 10 years, CBSA encountered a shooter who wanted to commit suicide by cop at Peace Arch and there’s was a shooting at the old Peace Arch.

We, too, are limited on budget constraints. Our officers are working a lot of overtime, not because they want to, but because they have to. I have to recognize they are human beings and make sure they’re able to perform their duties.

We are the face of this nation. Very likely this might be the first time an individual comes into our great country. I want to make sure their first encounter is memorable. It’s my goal that we treat everyone with dignity and respect.
What is your biggest achievement so far with CBP?
Building relationships with our external partners, internal partners and outside government agencies. Letting people know we’re human and creating an environment that people aren’t afraid of. There’s a lot of anxiety when crossing the border because people don’t know what they’re going to encounter or how our officers are going to treat you.

I never thought I would be in this position. I might be the first director who wears a turban. I recognize our limited time to make an impact. If you want to do and accomplish something, there has to be a certain need. My motive in moving up quickly was to see how much I’m able to influence.

In every position I took, I was still limited in what I could and couldn’t do. Maybe the reason I moved up quickly was I wasn’t seeing the needed change. I never looked at myself as the outsider, but my looks will deceive you. As an American, it doesn’t matter what you look like or wear. Maybe there’s a misconception that I’m trying to prove myself.
What do you see as the biggest challenges within CBP and how are you working to solve those?
Personnel, resources and budget. Covid significantly affected our budget. Most borders are open 24 hours a day, seven days a week. Congress is working with CBP and the Department of Homeland Security but if there’s no travel, there’s no money. A lot of CBP’s budget comes from user fees and a lot of those are in air travel and commercial trade.

Covid poses a big challenge. The majority of our staff are vaccinated but some are not, so the challenge is to make sure staff is healthy. We take it seriously and we are prepared but at the same time those challenges are continuous. I hope we continue to be healthy so we can make sure we are doing our job and allowing travel and trade to continue because that has a significant impact on our local economy.
You had mentioned at a previous city council meeting that you want to improve community relations. Can you explain how you plan to do that?
Outreach. I would love to host events and give tours. There’s no curtain here, with the caveat we have to manage tours. I would love to work with all of the city council folks, anyone from the city, we’re working with [Blaine police] chief Tank, and letting them know what we do. We are an entity that is here but that nobody knows anything about.
Without the uniform, we’re just human beings. It’s not just a job for us. We take pride in what we do.

We have to open our doors to create community relations and that’s the biggest challenge. Immigration is a hot topic and we recognize it. We want to introduce ourselves to the local schools. When events take place, for example, the [lockdown] in Blaine, we were the first ones assisting in clearing the buildings in addition to the other law enforcement entities. We have personnel who are trained and the resources. It’s not our primary mission, but on a personal level, we are here to assist. We’re putting in a plan to do active shooting trainings.
Historically, we haven’t put ourselves up in front because people usually don’t like us and have opinions on what we do. But if we keep ourselves in the shadows, that doesn’t help us.