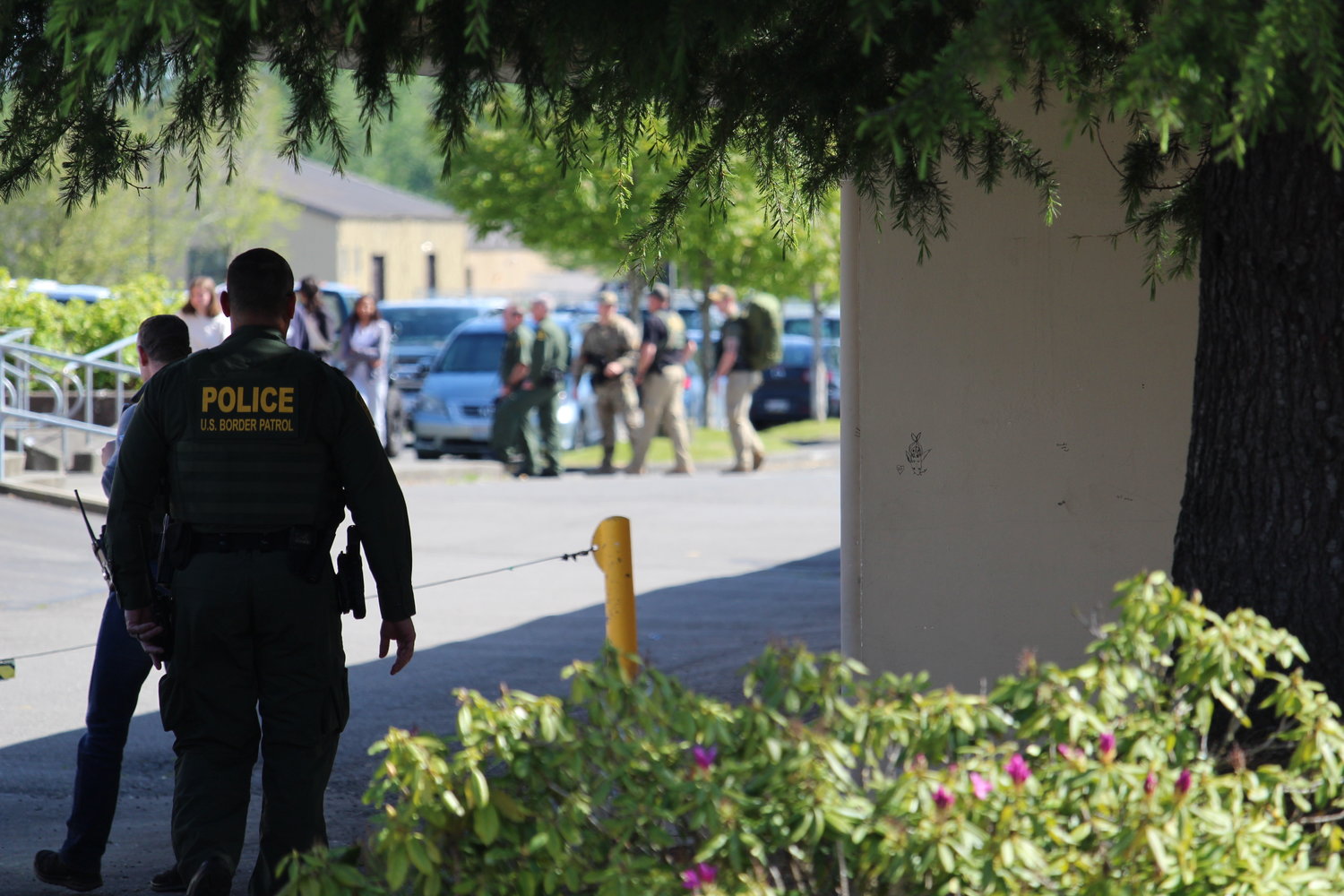 U.S. Border Patrol agents assess the threat situation on Blaine school district’s main campus the afternoon of May 25 after a female student received text messages threatening to kill her and shoot up the school. Blaine Police Department officers arrested a juvenile boy suspected of sending the texts May 28. No one was injured and no weapons were found.
Photo by Molly Ernst 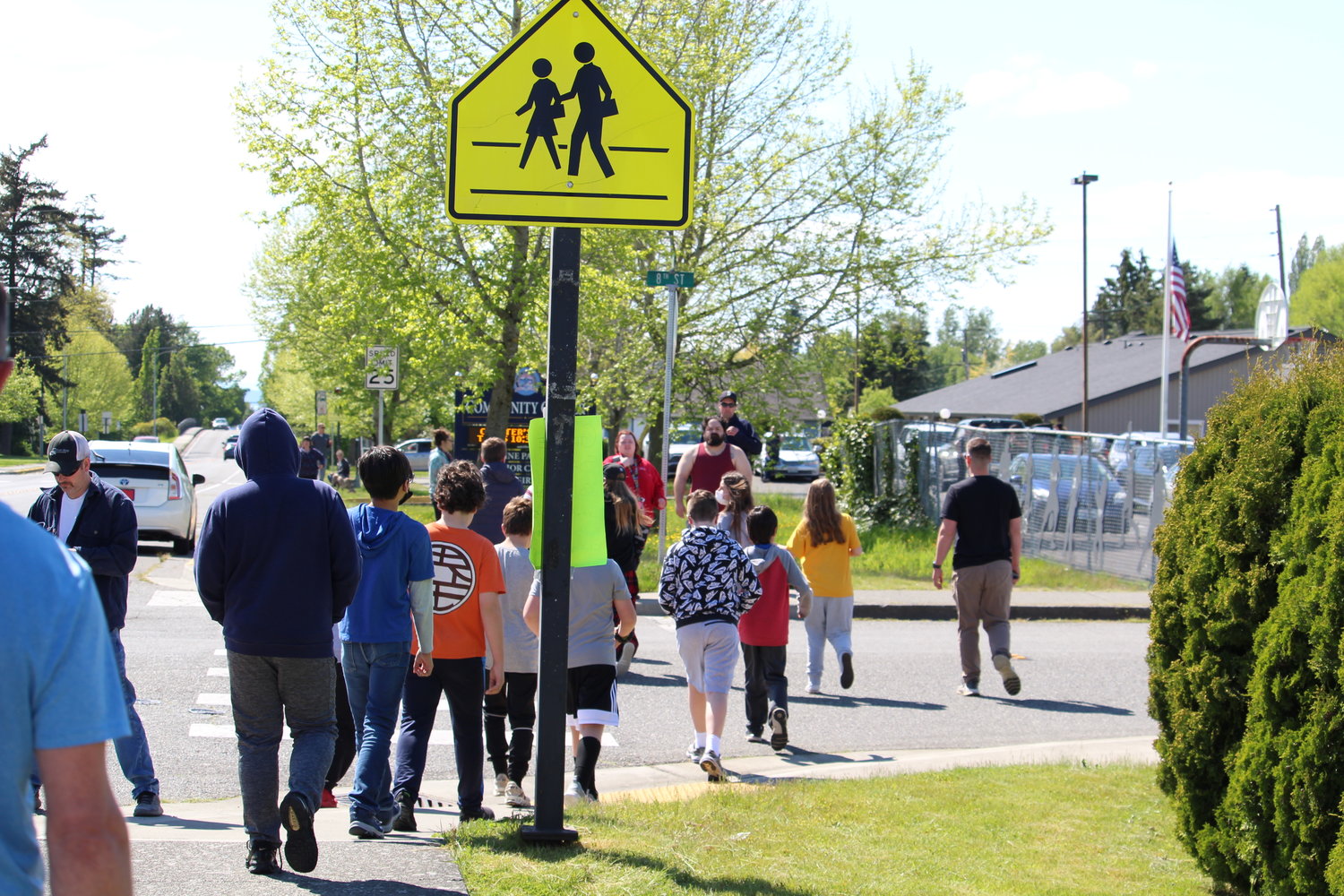 Blaine students escorted to the Blaine Boys and Girls Club on May 25.
Photo by Molly Ernst 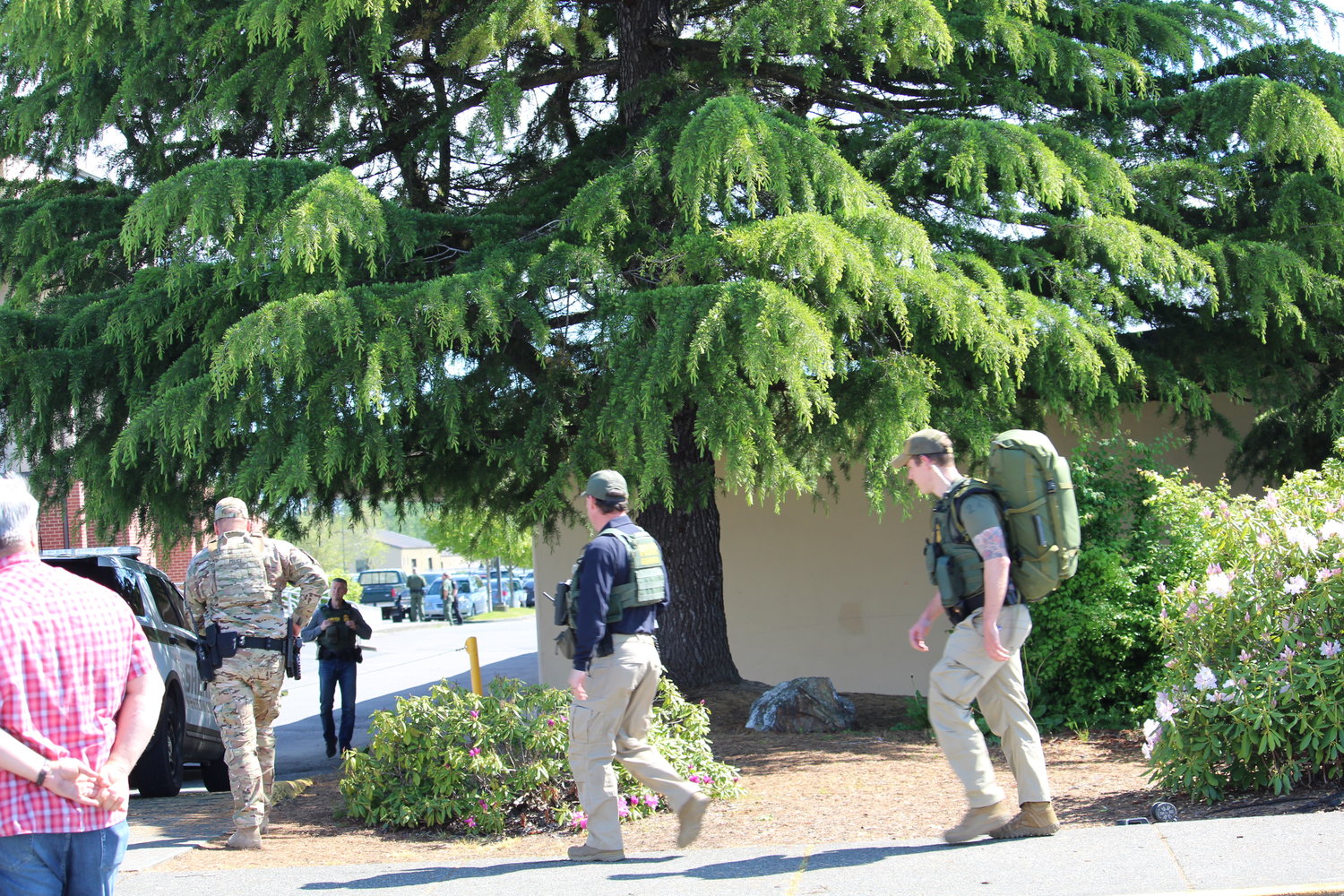 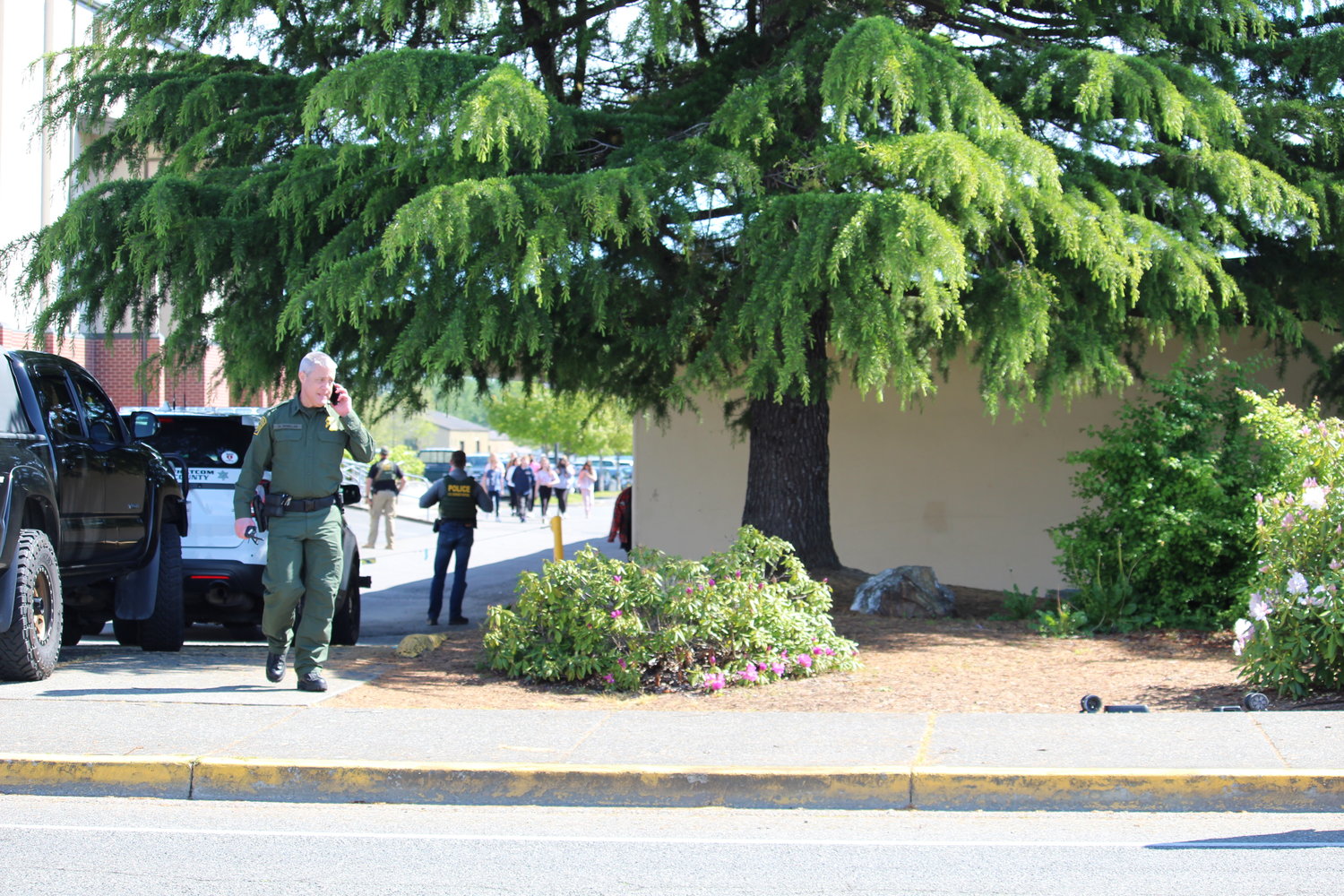 Blaine Police Department (BPD) officers arrested a Blaine Middle School student who is suspected of making anonymous threats serious enough for school district administrators to put the main campus in lockdown on May 25. The boy was arrested after sending additional threatening text messages that he said were meant to be a prank, according to BPD. No weapons have been found.

BPD officers were notified of threatening text messages sent to three Blaine students on May 27, similar to the messages sent May 25 that threatened to kill a female student and shoot up her school, according to a BPD statement.

Police learned of another threatening text at 12:45 a.m. May 28 and contacted the male student who received it by phone. BPD officer Jon Landis questioned the student about inconsistencies in his story and the boy admitted he had sent all of the text messages as a prank, according to BPD. The suspect used a third-party app to send the messages anonymously. Police initially tracked the messages to a city in Alabama because the app allows the user to select phone numbers from a list, making the messages anonymous.

Landis arrested the boy in Bellingham and booked him into Whatcom County Juvenile Detention Center around 1:22 a.m. on May 28. The boy was arrested on felony charges of cyberstalking, harassment and threats to bomb or injure property, BPD lieutenant Michael Munden said. Police are in the process of obtaining a search warrant as of June 1.

Munden said the boy doesn’t have previous incidents with BPD where he was a suspect but had previously been listed as a victim, reporting party and witness in other cases.

“I appreciate the patience you, as our community, have had this week. I understand how stressful and difficult it has been,” BPD chief Donnell Tanksley wrote in a statement. “Our community is very special, and we consider it a privilege to serve you all.”

A female Blaine student first received anonymous text message threats around 11:12 a.m. on May 25, and police were called at 12:16 p.m., Munden said. The second text that caused the school to go into lockdown was received at 2:28 p.m., Munden said. Lockdown started at 2:29 p.m. and Blaine officers entered the middle school at 2:32 p.m.

The first text threatened the female student directly and said they would shoot up the school, Munden said. In response, BPD sent additional officers to the campus. The second text had more detail than the first, Munden said, and the person said he was on campus and was looking to kill the student.

BPD announced at 5 p.m. on May 25 that all Blaine schools were cleared and safe. There were no injuries, according to the statement. The school district started releasing students to their families at the stadium. School buses picked up students at 7:15 p.m., nearly five hours after regular dismissal.

During the lockdown, parents and family members were asked to not approach or call schools. Anyone waiting to pick up a student was asked to leave the campus area.

BPD officials thanked students for their response to the stressful and frightening situation.

Blaine school district canceled school for the remainder of the week, and anticipated the state would not require make-up days. “Be well and take good care,” a school district spokesperson wrote on Facebook.

In previous incidents, a 12-year-old Blaine student was arrested last December after being found responsible for a graffiti threat of a school shooting in a boys Blaine Middle School bathroom. A similar threat had been found in a girls Blaine High School bathroom a few days before the arrest last December. Those investigations found no evidence of an active threat, district superintendent Christopher Granger previously said.

Blaine has had two threats in the past 15 years in addition to the most recent lockdown and the December lockout, district communications director Lisa Moeller said. The district canceled classes for a day in February 2018 because of threats later discovered to target Blaine, Minnesota, and the district went into a lockdown when a student brought a BB gun to school in September 2011.

The lockdown came one day after a school shooting at Robb Elementary School in Uvalde, Texas in which 19 students and two teachers were killed. BPD public information officer Tami Bhachu said the tragedy led the officers to respond with an abundance of caution.

“Despite the chaos and difficulty of this day, we are all incredibly grateful for the partnership between our school district and police department,” Munden and Granger wrote in the statement. “Most of all we are grateful for the safety of our community’s children.”

Birch Bay resident Ashley Donald was waiting to pick up her first-grade son and kindergarten daughter when it was announced over the speakers that students and staff needed to stay in place while parents were asked to get in their cars and leave campus.

“Don’t tell parents to leave their kids,” Donald said. “You can’t just tell us to go home and wait for a phone call.”

Donald huddled with other anxious parents and traded stories of what they’d heard. After waiting nearly four hours, Donald was able to reunite with her children at the football stadium and had them home by 7 p.m. She said she believed teachers and law enforcement officers were doing their best but she hopes the school will have more organization if a lockdown happens again.

Donald said she wished Blaine had more security such as metal detectors and requiring students’ bags to be searched. She’s also considering getting phones for her children to communicate if a lockdown were to occur again.

Donald said the younger kids were less scared because they thought it was a drill, but it was still rattling for students to see cops going into the schools with big guns. She said it was extra concerning because of the two threats in December, which came as other districts in Whatcom County were facing similar threats.

“On the way home my son said, ‘I’m happy I didn’t die today, Mom,’” Donald recounted. “That’s not something you should be saying at 8 years old.”

Blaine school district administration brought in Whatcom County’s mobile response team to support students and staff, as well as Animals as Natural Therapy’s animals at the entrance of each school when classes returned May 31.

Erika Creydt, Touchstone Health Clinic counselor and Blaine school board member, said it’s important for adults and children to understand that the school incident will impact everyone differently depending on their life experiences and what they thought occurred.

“When you’re in a situation where you think your life may be in danger, trauma may turn up weeks, months or years later because of the way it manifests itself,” Creydt said. “This incident impacted people differently based on what they saw, what they thought was happening and their past experiences.”

For example, Creydt said someone who has experienced domestic violence with a gun could have a different reaction to the threats than someone who hasn’t. As well, a student may have felt more secure than another student in the building where the threats were targeted.

“I think it’s important people are given that space to process it and the grace that it’s hard to process,” Creydt said. “This is emotionally exhausting for kids, teachers, law enforcement officers and parents.”

She added it’s OK if people don’t want to talk about the lockdown yet, because pushing people to talk about a scary event when they’re not ready can be harmful.

Creydt recommended students nervous returning to school to be mindful of their thoughts, practice deep breathing exercises and yoga to counter increased adrenaline. She added peer support is valuable in collective incidents and encouraged students to talk about their resiliency in going through something hard and surviving it together.

“The feeling of powerlessness is at the core of a traumatic event,” Creydt said. “Even though no one was physically hurt, a lot of people went into that state of powerlessness.”

Creydt recommended adults not be surprised if they see symptoms in their children or themselves, now or in the future, and to know support is available. Trusted adults can remind students there are safety protocols in place and Blaine is a community with a strong law enforcement presence that can quickly respond. Listening to students’ fears also helps, she said, because talking about a fear can make it less scary.

“This was a really big, scary thing for a lot of people, so they may develop symptoms. And if they do, that’s OK,” she said. “There’s a way to counter and cope with those symptoms.”

Washington state’s Office of Superintendent of Public Instruction (OSPI) published resources for adults comforting children after hearing about or experiencing school threats. Visit the OSPI website at bit.ly/3wOExzG for the resource list.

Washington state law requires school districts to have a school safety plan and evidence-based threat assessment program, according to the OSPI website. Required guidelines include family reunification, meeting with first responders and communicating and helping everyone in schools. This fall, the Washington State Attorney General’s Office is expected to release a statewide reporting system for people in schools to report suspicious behavior and threats.

Granger wrote, through a spokesperson in an email to The Northern Light, that district staff are required every year to complete standard response protocol training from the “I Love U Guys” Foundation, a nationally recognized school safety plan. The Washington Post reported that Robb Elementary School in Uvalde also uses it.

Granger said the school district would like to improve from the lockdown and is using feedback to better its safety plans.

“We are still in the process of gathering and evaluating feedback from staff, so that we may consider their experiences in our plans for improvement,” he wrote. “We have received feedback from both staff and parents regarding the reunification process, and there are things we know we will want to do differently should we ever have to do it again.”

Granger, who has two children in Blaine schools, said he was thankful for the administrative team’s strong leadership and the love staff showed to students.

“We want our students to be able to return to their routines and enjoy the many fun events to come between now and the last day of school,” he wrote. “If a student needs someone to talk to, there are trusted adults in every school building ready to help with that.”