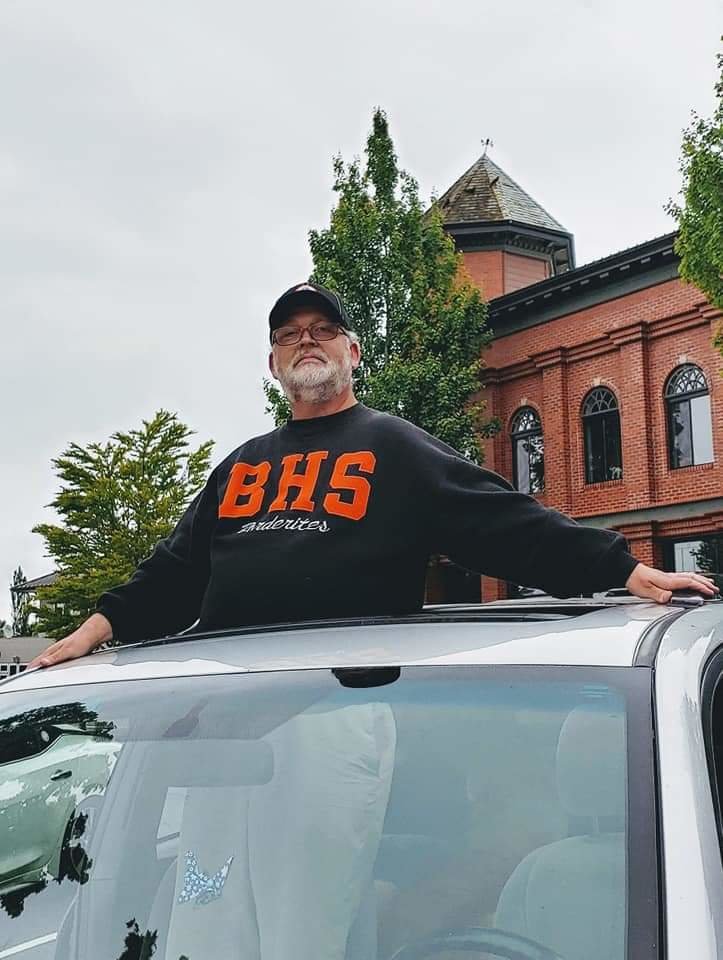 Bob Gray stands out of a sunroof for a parade in downtown Blaine.
Courtesy photo 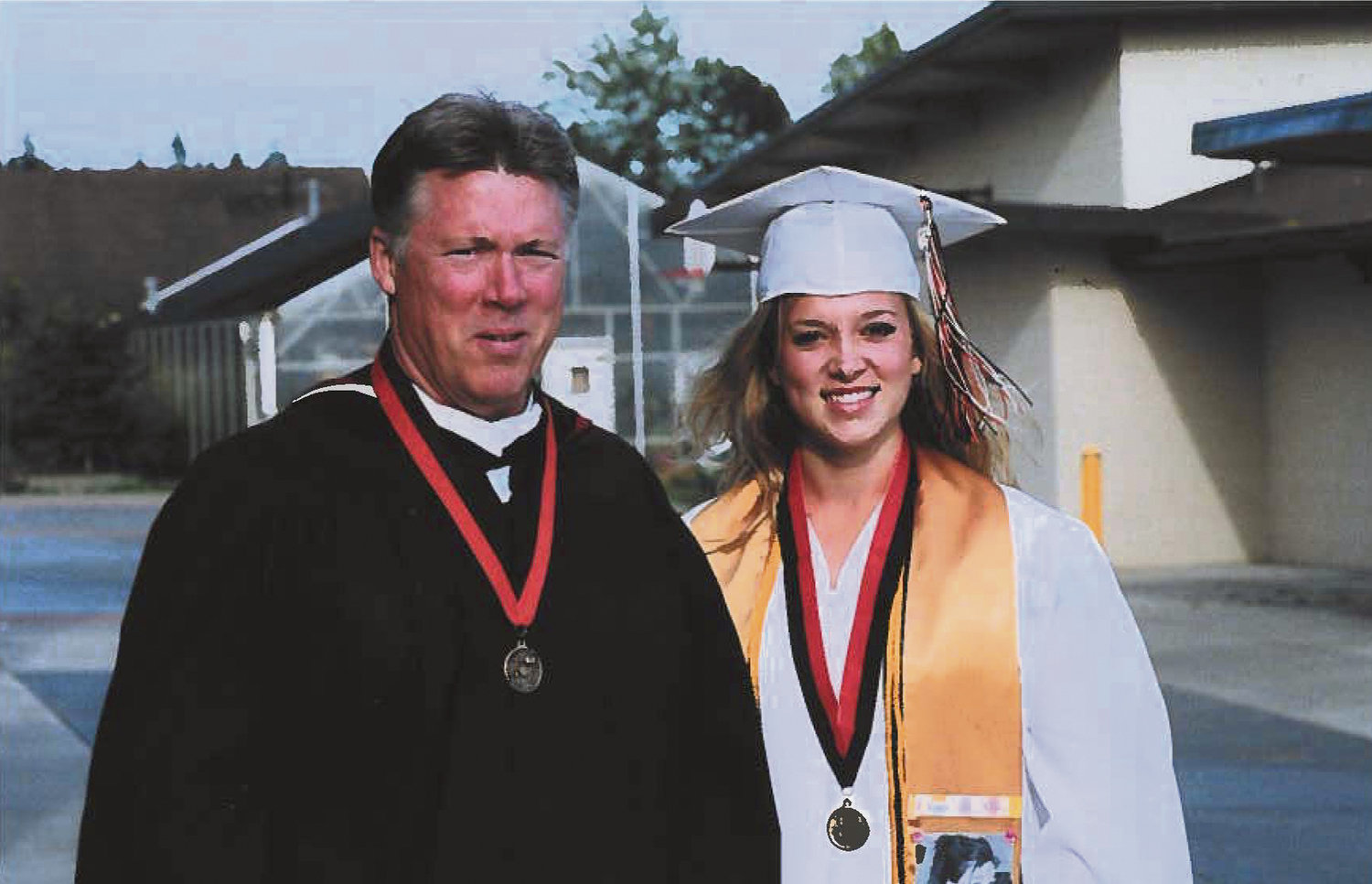 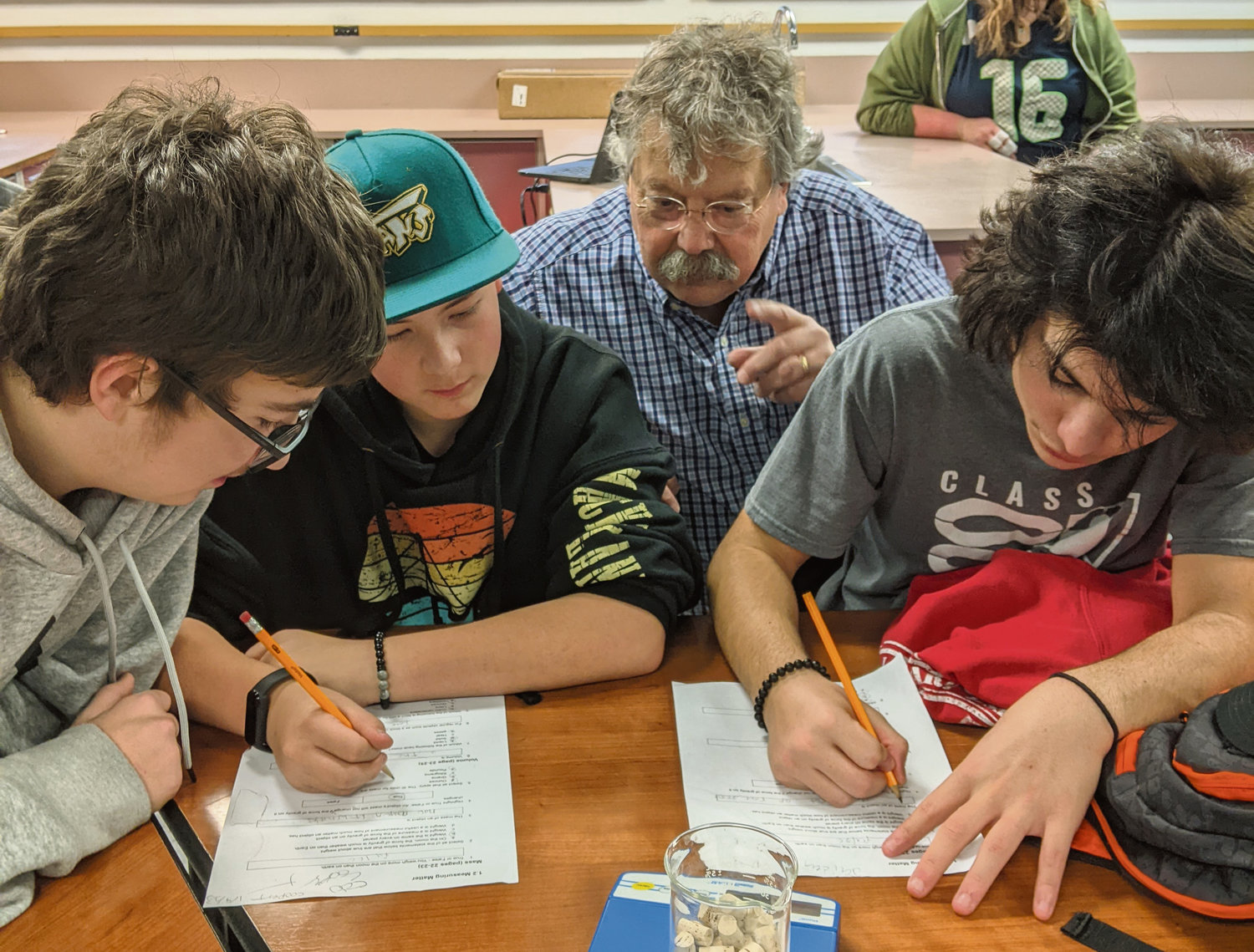 Dan Steelquist works with students in his class on January 10.
Photo by Lisa Moeller
Previous Next
Posted Wednesday, January 18, 2023 4:37 pm
By Ian Haupt

The Blaine school district has four veteran staff members retiring at the end of the school year. Combined, they retire with 136 years of service.

More staff members are expected to put in before the end of the year, but superintendent Christopher Granger has previously asked staff to notify the district early if they plan on retiring. The district is in the midst of budgeting issues, and these early retirement announcements will help it plan for budgeting and hiring next year, he said.

Blaine school board president Dougal Thomas said during the December 13 regular school board meeting that over 100 years of teaching experience had been put in for retirement ahead of the meeting, which the board accepted.

“I wanted to take the opportunity, on behalf of the board, to thank all those people for their service, and [to say] what it means to our community to have people like you, and what it’s going to mean to lose folks like these folks,” Thomas said during the meeting. “[These are] some big shoes to fill. So thank you.”

Bob Gray graduated from Western Washington University (WWU) with a music degree in 1981. He married his wife Dorita Gray that summer and took a job as the music teacher and band director for the Blaine school district in the fall.

Blaine’s high school band was mostly freshman and 8th graders with a few juniors and seniors at the time. Bob said the band had only 12 or 13 members his second year teaching. In those days, the pep band sometimes played with nine students while he would cover a trombone or bass drum part. Eventually, after five years, the program started turning around.

“I didn’t have any magic answers, just that I kept coming back every day,” he said. “That’s maybe my biggest strength: That I’m just too stubborn to quit.”

Bob said he didn’t intend to spend his whole career in Blaine. Part of WWU’s music program indoctrination, and its ties to Woodring College of Education, encouraged graduating students to find small school bands to lead as a stepping stone. But as the band grew, its connection with the school and community did too, so he decided to stay.

Bob said one of his favorite memories was taking the band in the late ’90s and early 2000s to boys basketball’s two consecutive 2A state championships, led by Luke Ridnour, at the Yakima Valley SunDome. He said people recognized the band and would stay during halftime to listen to them play.

Bob has taken the wind ensemble to Japan five times, where the band played at the Funabashi Music Festival in Funabashi. He said the bands and musicians at the festival always inspired them, but the real life-changing experience is that the students lived with a host family for 10 days. Bob said many of the students return to visit their host family and some teach English in Japan. He said some of the host families have even traveled to Blaine to watch their “American child” graduate from high school.

Bob has played for the Bellingham Symphony Orchestra for 35 years. He currently sits as the sole bass trombone.

Upon retirement, Bob said he hopes to take a road trip with Dorita. He said he would like to see Zion National Park in October, when there’s a chance of snow. He would also like to return to Japan. But he said, most importantly, he will be supporting Dorita as she starts a new trial of cancer treatment.

“I couldn’t have done what I do, especially spending the excessive time with early rehearsals, or sectionals after school, or taking on trips and things like that, if [Dorita] wasn’t there,” Bob said.

Bob and Dorita live in Ferndale.

Nix installed the first computer network at the school district, using copper wire, in the mid-1980s. He said his dad was a technician and supplied him the tools. He did it after hours and set up email for teachers. At the time, he said people in the district were skeptical.

“‘What are you going to do with that?’” he recounted them asking. “Now we can hardly think of not doing it.”

Within a couple of years, the district had a full computer network set up across the district, he said.

Nix said he has mostly taught English over the years, but he has also taught history, Advanced Placement (AP) government, AP economics, algebra and geometry.

“I have one of the old certificates that allows me to teach any subject,” Nix said with a laugh. “They don’t do those anymore.”

Nix has secured over $1 million in grant funding for the school district over 20 years. He said he stopped counting after reaching $1 million.

Those grants have funded AP classes, advisory programs and GEAR UP, which is a competitive federal program that provides six- and seven-year grants to increase the number of low-income students who are prepared to succeed in postsecondary education, according to its website. He is also the district director for the Advancement Via Individual Determination (AVID) program, a college readiness program implemented in more than 7,000 schools across the U.S., according to its website.

“It’s really for students in the middle, and it’s to teach them how to succeed after high school,” Nix said. “So the students are pretty motivated.”

Nix has taught night classes at Whatcom Community College and other community colleges while teaching at Blaine. He previously taught kindergarteners and their mothers German in Richland. He also coached Blaine wrestling and cross country for multiple years.

Nix said he plans to read and “dabble” in writing during retirement. He said he enjoys Shakespeare. He also hopes to travel, do some woodworking and exercise more.

Nix has four adult children who live in Washington. He lives in Birch Bay.

Dan Steelquist started teaching in the Blaine school district in 1987. He graduated from WWU and moved up to Blaine with his wife Sue Steelquist when they started having children. Sue taught in the district for 38 years and retired last year. Sue taught first and fourth grade and did enrichment work before teaching kindergarten.

“We’ve looked elsewhere, but this is home,” Dan said. “We’re both Seattle transplants and got drawn to Whatcom County. And then landed here, and met some incredible people that we get to work with, and so we figured, ‘Let’s stay here.’”

Dan worked for four years at the elementary school before moving to the middle school. He’s taught language arts, social studies and math. He didn’t originally plan on teaching middle school – like most who end up in the middle school, he said. He said he enjoys the transitional age of middle school and it fits his personality well. There are certainly difficult moments, he said, but the good ones outweigh them.

“It’s a pretty special group of people to be around,” Dan said.

Dan has led 26 groups of eighth-graders to the San Francisco Bay Area over the years – a program that restarted this year since the Covid-19 pandemic. The program gets kids, many who may have never flown before, out of a small town and introduces them to traveling through a safe environment.

“My goal there is to get them to think about what they might be interested in after high school before they even get into high school, so they can set their sights on big things,” Dan said.

Dan said he currently has some students whose parents he taught. He said those are some of the victories: Seeing the joy in their family. He also said one of his favorite feelings is having a classroom grasp the main idea of a lesson after leading them through it. “That’s really satisfying,” he said.

Dan said he and Sue will stay in Blaine. He may come back to the district as a volunteer, but hopes to do some traveling in the meantime. Dan and Sue take bike-touring trips in Europe. They have three kids, two are on track to become doctors and one recently finished a doctorate degree in geology.

Richard Shockey grew up in McMinnville, Oregon. He went fishing in Pacific City, Oregon, during the summer with his father, who was a teacher. After high school, he went to school for two years in Oregon and then moved to Bellingham in 1978. He fished commercially full time in the area and in Alaska and California through the 1980s.

In 1992, he went back to school to get a teaching certificate while he worked in the grocery business. He started working at Blaine High School in 2003.

Since the pandemic, Shockey has transitioned to working as a para-educator at the middle school.

“Seeing [students] succeed, getting something completed,” Shockey said will be his favorite memories. “That’s the big thing for me. It’s not one big thing. It’s just 20 years of little things that I’m going to be able to remember.”

Shockey coached boys junior varsity golf for about eight years and has been the varsity coach for five. He also works the scoreboard for football and basketball games.

Shockey was adamant on giving more attention to the other teachers retiring. “They’re the giants,” he said, but he’s had his own influence.

“I’ve had kids come and say, ‘You know, if it wasn’t for you, I wouldn’t have gotten this job or I wouldn’t have been able to do that,’” Shockey said. “But that’s what I got paid to do.”

Upon retiring, Shockey said he’s looking forward to going fishing in Homer, Alaska, and spending time with his kids and grandchildren.