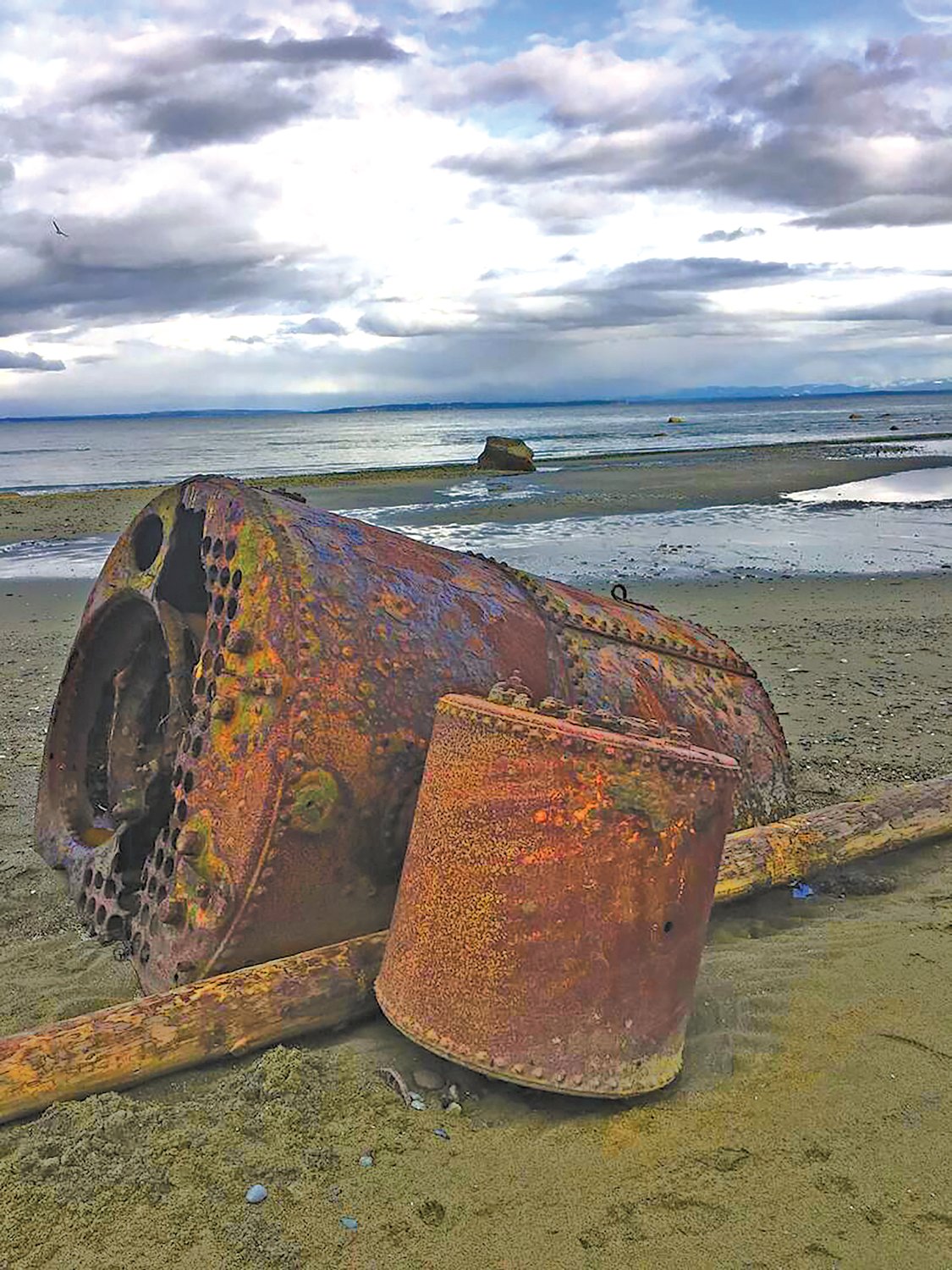 Goodfellow’s big boiler still lays on the beach where he left it.
Photo by Renée Coe
Posted Thursday, July 28, 2022 9:51 pm
By MArk Swenson

Up the beach from Lily Point, there is a large boiler which has been rusting away for over 130 years. Contrary to popular belief, the big boiler is not a remnant of the cannery at Lily Point. Indeed, the boiler was owned by an early Point Roberts pioneer who was very much in competition with the cannery owner.

Born in 1837 in New Brunswick, Joseph Goodfellow arrived on the Point in the 1870s and lived by the boiler in a log cabin on the beach, leased from John and Kate Waller. A very large, muscular man who drove in fish trap pilings by hand, Goodfellow fished and operated a saltery on the beach.  The boiler is believed to have been used to boil sea water to produce salt for preserving fish. The Point Roberts Historical Society notes some evidence this section of the beach was traditionally called Goodfellow Point and Goodfellow Spit, though the name does not survive on official charts today.

John Waller and Goodfellow were the first two pioneers to build fish traps at Point Roberts. As they experimented with various trap designs, the Wallers leased land at Lily Point to Edmund Wadhams, on the site of the Coast Salish fishing village. Newly-arrived in 1893 from Ladner, Wadhams quickly built a cannery at Lily Point and added his own fish traps to the reef.

What we know as a peaceful park today was seething with activity back in the day when there was big money to be made off salmon. Goodfellow and Wadhams sued each other, and both were sued by wealthy cannery interests on the mainland, over fish trap placement, leading a judge to rule the fish traps had to be 1,500 feet apart. In one notable case, Goodfellow sued Wadhams for improperly trap fishing without all the required permits. Wadhams countered that the law specified the fish trap rules were for “Puget Souvnd,” and won his case on the grounds Point Robert is on the Strait of Georgia, any not anywhere near Puget Sound. Cases like this led, in part, a century later to the adoption of the term Salish Sea to collectively describe both waterways.

In the autumn of 1893, Goodfellow gathered up his salted salmon in barrels and went on a road trip back East to sell it.  He made sales in Nova Scotia and Boston, and had returned as far as Chicago when he went missing. The Bellingham Bay Express reported in April 1894, “Goodfellow, the well-known fish man of Point Roberts, has mysteriously disappeared, and fears are entertained that he has met foul play.”  Presumed dead, his attorney started settling his affairs, when Goodfellow turned up and went back to work as though nothing had happened.

Goodfellow also tussled legally with the landowner Kate Waller. When the state land commissioner decided in her favor, and financially hurt by rival fishing interests, Goodfellow left the beach, and his boiler, and squatted 37 acres near today’s marina with his wife and eleven children.  A lone fruit tree near the edge of the road at the top of Simundson Drive is all that remains from his farm. Goodfellow died December 31, 1915 at age 78 and is buried in the Blaine cemetery.

Learn more about our amazing history at the Point Roberts History Center on Gulf Road. Stop by on Saturdays, and it’s open this summer on Friday afternoons too.