Part One: Brian Calder – A man with a plan 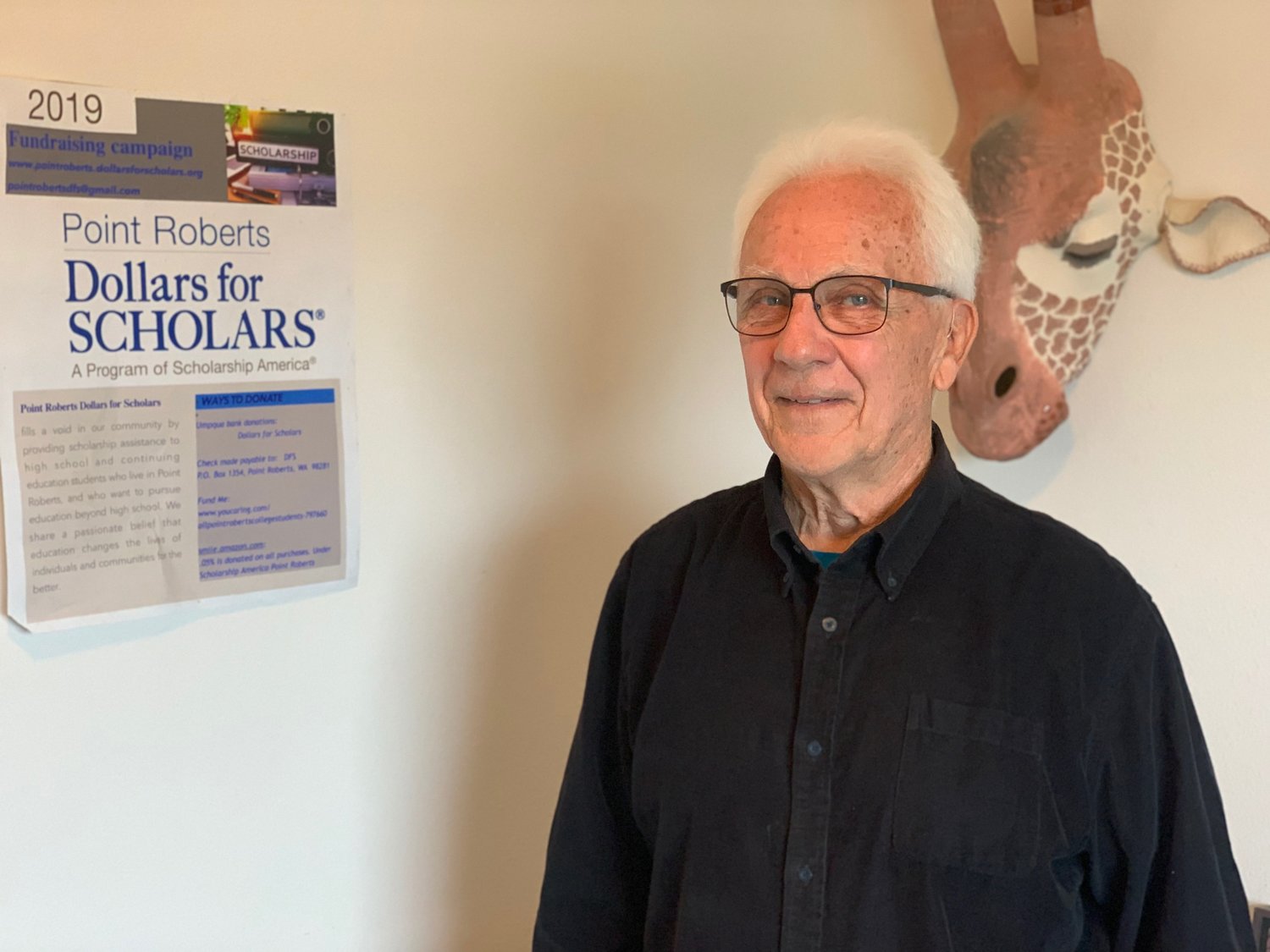 Brian Calder in his home office. Calder is also president of the Point Roberts Dollars for Scholars group.
Photo by Pat Grubb 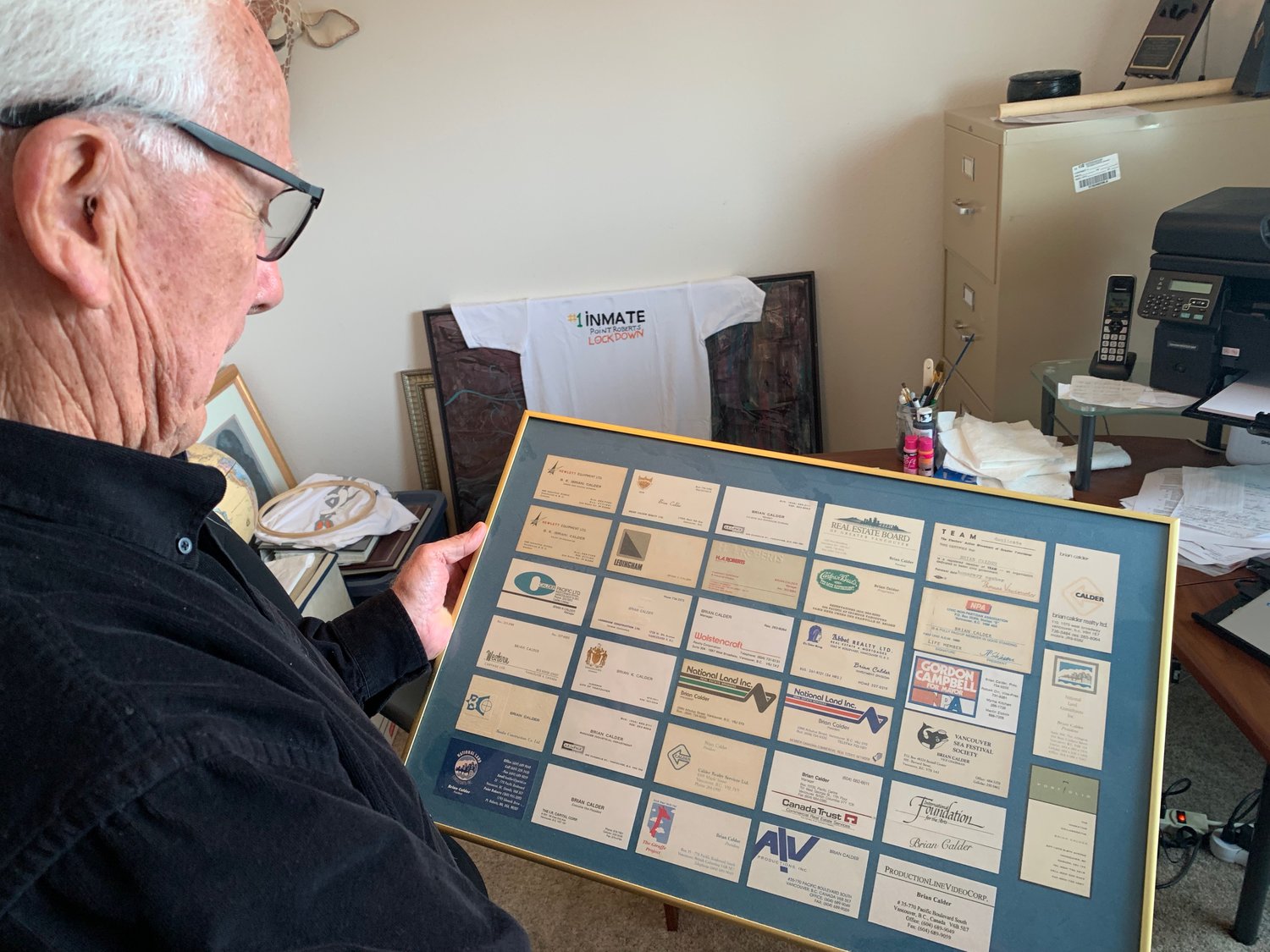 Calder, with a lifetime of business cards.
Photo by Pat Grubb
Previous Next
Posted Thursday, May 27, 2021 7:32 pm
By Pat Grubb

“This is the first time any government official on either side of the border has taken the time and made an honest and sincere effort to address our concerns. We thank him very much for that. I personally consider him a concerned, compassionate, responsible public official,” said Brian Calder, describing a letter he had just received from Washington state Secretary of Health Umair Shah. Shah had responded within a week to a letter sent by Calder to him and Adrian Dix, B.C. Minister of Health on May 17. Calder has yet to hear from Dix.

Given Point Roberts’ high level of vaccinated residents and few cases of Covid-19, Calder had proposed that our border crossing be used for a pilot re-opening test. While Shah pointed out that neither his department nor the state have the authority to make that decision, he promised to talk to his B.C. Ministry of Health counterparts in support of the proposal.

Calder, president of the Point Roberts Chamber of Commerce, subsequently started an online petition in support of the pilot program (chng.it/CqP7YRp9). As of press time, close to 1,000 people had signed on in support. An online poll on the pilot by the Delta Optimist has had 576 responses with 84 percent (482) in favor and only 16 percent (94) against.

This is not Calder’s first foray into the Covid-19 fray. As president of the Point Roberts Chamber of Commerce, he has been an ever-constant voice in the wilderness trying to bring attention to the plight of border-locked Point Roberts. The list of interviews on radio and TV and print stories he has appeared in run to two pages of single-spaced entries. CBC, Global, CKNW, King 5, CBS Sunday Morning Show, PBS, Vancouver Sun, NPR – the list goes on and on. It’s not just the time he spends driving reporters around the Point and being interviewed, in some cases, he spent a month or two in advance convincing the media outlet that Point Roberts was a worthwhile story to cover.

Point Roberts is a ghost town, he says, and it’s doomed if the politicians don’t get off their butts and actually do something. It’s not short-term fixes he’s interested in – he also is looking down the road after we get through the pandemic.

His experience includes: Vancouver city councilor, 1968-1972. Owner and operator of a firm of 31 commercial realtors. Director of economic development, city of Abbotsford. Land acquisition and project consultant on many major private and public development projects. President of the real estate board of Vancouver.

BC: Get the Canadians back and focus on their needs and their desires for holiday resorts and other amenities. Logistically, you cannot bring enough Americans here to make a significant difference like you can with the Canadians and have historically since 1920. That’s who built Point Roberts. You can’t get a typical economic development plan from a typical economic  group because we’re not typical. We are unique in every sense of the word.

APB: What’s holding us back?

BC: We haven’t had a review of the zoning bylaws for 30 years. They are holding us back hugely – they are antiquated and counter-productive. They are a joke and the joke is on us. And here we have local groups tweaking a dead document.

APB: Give us an example.

BC: OK, Gulf Road is an open street end plan. There is nowhere else to put a commercial, open street center. For the greater community, Gulf Road is the place. You say you want a commercial strip, maybe a Friday Harbor-type place with a boardwalk, funky, arts & crafty development? That’s fine, I like that, too. But what we have is zoning in place that it cannot, not, will not, it cannot be built by any stretch of economic basis.

You have two people, Jeff Peltier and Guy Garbo, who both proposed buildings that would be artsy-crafty on the bottom and residences above, starting about four or five years ago. Jeff had it designed and took it to the county.

The county came back and said he had to have a 20-foot set-back on a road that’s too wide to begin with, a sidewalk, a fire hydrant, a traffic study, six off-street parking spots in the back, plus the road to the parking spots because they can’t be in front, the septic system, sprinkler the whole building even though it’s only two stories tall. What is the history of fires in Point Roberts? Negligible.

In addition to the structure, it was another $230,000 to fulfill the the requirements. For what? What happened to the funky Friday Harbor pedestrian-friendly attraction? They are applying downtown high-density, Bellingham-type rules to a building that could only be 600 square feet at that point as opposed to 2500 square feet. They’ve prejudiced the whole concept that we love and made it so it just can’t happen.

The whole planning thing in Point Roberts needs to be reviewed and thrown out. If you took that plan to a school of planning, they’d laugh you out of the building.  They’d say, no, wait, we want to use it as an example of what not to do.

We have no industrial zoning. All of us with equipment larger than a riding mower are illegal because we aren’t supposed to park it here. Are we supposed to drive it to Delta? It’s so fundamentally flawed.

APB: What about the wetlands?

BC: It’s Class 4, the weaker one. Class 1 is a no-go. What I proposed three years ago to the county, deaf ears again, was a system where people could trade into a meaningful wetlands.

Then when you get a small property with a meaningless bit of wetlands, at a minimum, the county should be able to say to a property owner, you can contribute to a wetland fund for a meaningful wetland with marshes and plants that support wildlife. I proposed to turn it over to WWU and have the environmental school run it and make it a tourist attraction like the Save the Bog group across the line. Now, that would be meaningful for the wildlife.

(Part 2 will run in the next issue of the ePB as well as the next print edition of the All Point Bulletin.)