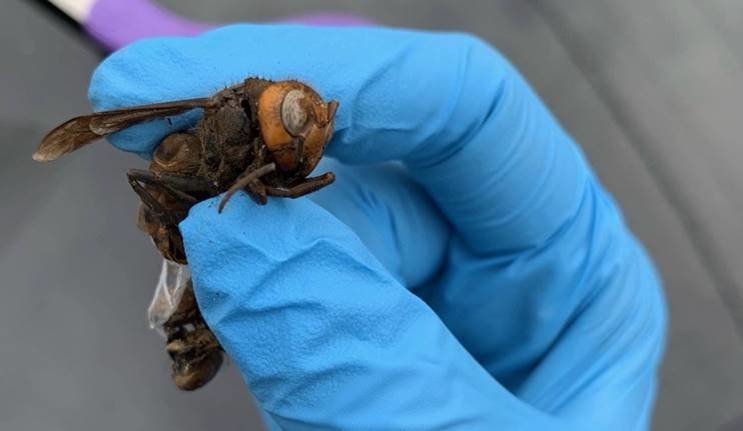 A decayed Asian giant hornet was found October 22 in B.C., less than 1 mile from the nests found in Whatcom County.
Photo courtesy WSDA
Posted Tuesday, August 2, 2022 11:35 am
By Grace McCarthy

Scientists are now asking the public to refer to the world’s largest hornets as “northern giant hornets,” opposed to the previously dubbed names “Asian giant hornets” and “murder hornets.” The name was changed in late July to avoid using a geographical region in the insect’s title.

The Entomological Society of America (ESA) adopted “northern giant hornet” in its list of common names of insects and related organisms. ESA didn’t have an official name for the hornets until now, according to a Washington State Department of Agriculture (WSDA) press release.

WSDA entomologist Chris Looney urged for the name to be changed to follow ESA’s naming guidelines on avoiding using geographic regions to name insects. The new name refers to the species originating from northern Asia, according to WSDA. ESA adopted the common name of Vespa soror, a similar species to the northern hornet, to become “southern giant hornet” in reference to its southern Asia origins.

“This is going to adhere to the standards of the Better Common Names Project, which the Entomological Society of America has launched over the past few years and seen a few offensive names removed,” WSDA managing entomologist Sven-Erik Spichiger said during a May press conference. “This will be one that will definitely cover it for sure.”

The name change will also avoid confusion between the commonly known “Asian hornet,” an invasive hornet in Europe. The northern hornet’s scientific name, Vespa mandarinia, will remain the same.

The invasive hornet gained popularity after a specimen was found in Blaine and a nest was eradicated on Vancouver Island in late 2019. One northern giant hornet nest was eradicated in east Blaine in October 2020 and three in 2021. No hornets have been found so far in 2022.