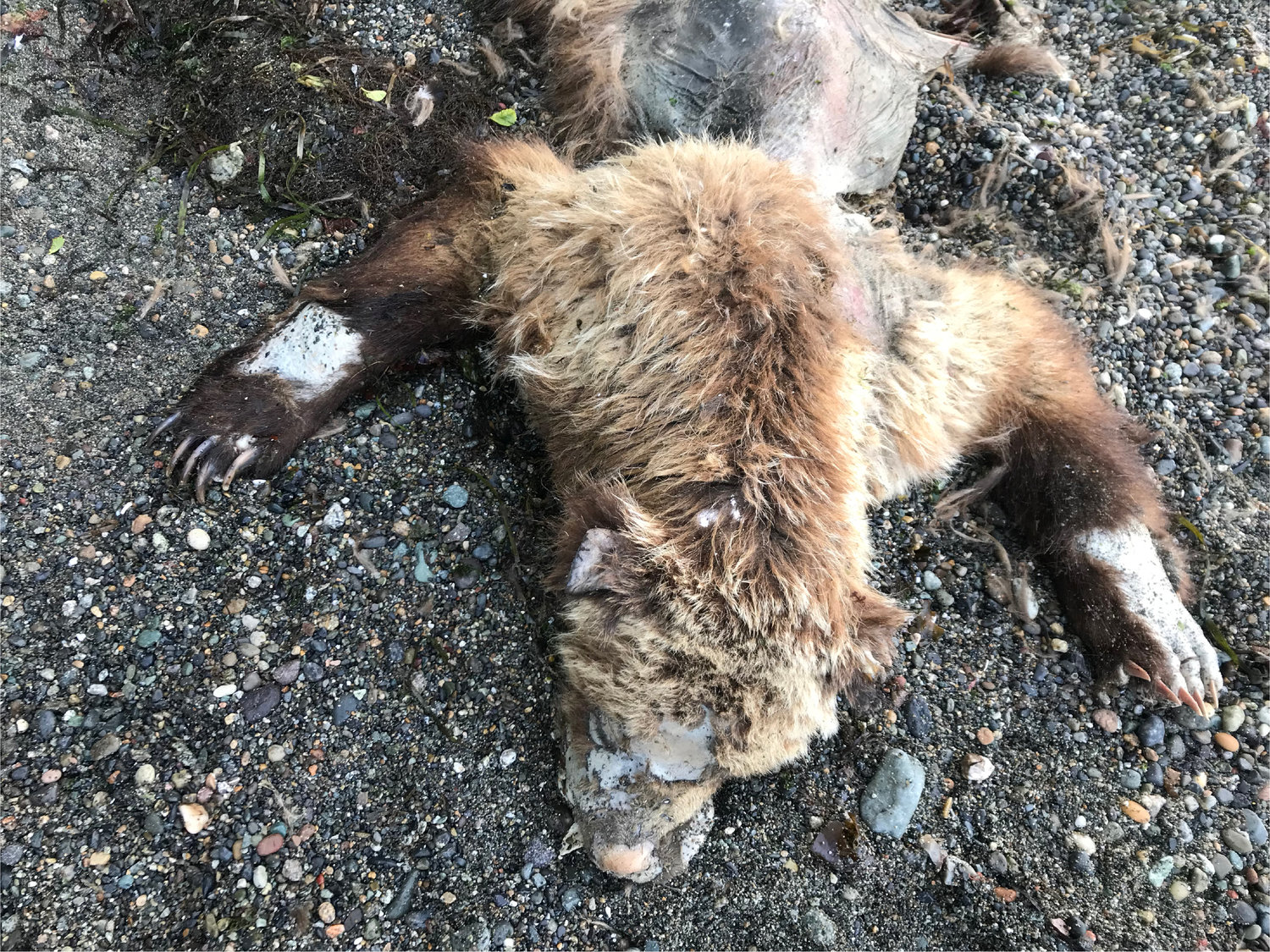 Experts believe a dead grizzly bear that was found recently on a Cherry Point beach originated from Canada, but are still piecing together how it got there.

David Jones, game warden for Washington Department of Fish and Wildlife, said he was surprised June 17 when he got a report of a possible dead grizzly bear.

“I’ve never seen a grizzly bear, dead or alive, in the wild,” Jones said. “This is super rare!”

Jones responded to a beach near Cherry Point at the south end of Gulf Road to find a dead male grizzly bear. He said it was about 250 pounds and a couple of years old. The area where it was found is a common spot to walk a dog, he said, close to a historic derelict conveyor.

Jones and a biologist from the Department of Fish and Wildlife took DNA samples – head, hair follicles and five remaining claws – that were given to federal agencies to analyze. He said the lab work will probably take a month or two.

Grizzly bears are classified as an endangered species in Washington and are federally listed as a threatened species under the Endangered Species Act. They once occupied much of the Cascades and eastern Washington, according to the Department of Fish and Wildlife website. A small, threatened population remains in the Selkirk Mountain Range in the northeast corner of the state.

Joe Scott, international programs director for nonprofit Conservation Northwest and a leading advocate for grizzlies in the North Cascades, said the bear’s death was unfortunate.

“I hope this incident isn’t a bad omen,” Scott said. “Maybe we could get something positive started out of this.”

He said he hoped President Joe Biden’s administration would look at this as a reminder – that grizzly bears once lived in Washington’s North Cascades and could again if proper recovery efforts were made. An environmental impact statement (EIS) for the reintroduction of grizzly bears to the North Cascades was disbanded in 2020 under former President Donald Trump’s administration.

Jones said the Department of Fish and Wildlife will communicate with Canadian experts about local populations once the lab work is complete. He suspects the bear came from Canada.

About 15,000 grizzlies were in B.C. in 2018, according to the B.C. Ministry of Forests’ grizzly bear population report. But it was estimated no bears were on Vancouver Island in 2018, and one to 10 bears per 1,000 kilometers were known to be in the southeast corner of mainland B.C.

Jones said backtracking through past current and tides data may lead to a possible place of origin, “but it will likely always remain a mystery,” he said.

Scott said he was positive the bear came from Canada. He said while there aren’t grizzly bears in Washington’s North Cascades, they are nearby. He said it’s possible a bear could have died or been killed in the waters off of Squamish, B.C. and was carried by the tide to Whatcom County. There is a chance of pinpointing where it came from if a DNA match is found, he said.

“It’s not unusual that it happened,” Scott said. “It’s unusual it ended up here.”