Recipes from the Point – December 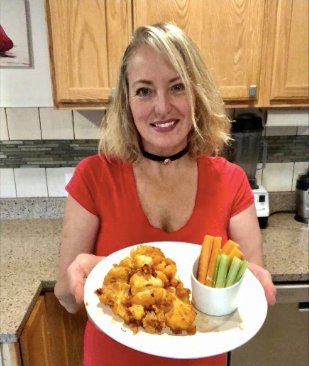 This month we are featuring our own Savilla Kress. This fashion model, turned fashion designer was educated at the University of Siena in Italy. She has an Etsy store where she sells amazing costumes and other creations. Her one-of-a-kind clothing line is also for sale at Auntie Pam’s Country Store. If you see Wonder Woman walking down the street on a sunny Saturday, you will know that it is Savilla and she really is a wonder!

Originally from western New York, Savilla was no stranger to buffalo wings. After she was diagnosed with kidney disease, she was advised by her nephrologist to become a vegetarian; or at least eat less animal protein which taxed her failing kidneys. Buffalo Cauliflower is a healthy and tasty alternative. The model and artist had a successful kidney transplant after twenty years of progressive renal failure. She is surviving and thriving and wants to share her favorite dish with the people of the Point. It’s a perfect holiday appetizer. Enjoy!

1 head of cauliflower, rinsed and chopped into florets

1 C. all purpose flour or coconut flour (for a gluten free option)

Grease baking pan with oil. Preheat oven to 375 F. Lay cauliflower florets on the baking pan and spray with oil. Sprinkle flour over the florets.

Bake for 25 minutes until golden brown, flipping the florets over halfway through to get all sides golden.

While the cauliflower is baking, get your buffalo wing sauce ready. In a small saucepan over medium low heat, melt butter and mix in hot sauce. Remove from heat just as it starts to melt. Add honey and stir together. Set aside.

Remove cauliflower from the oven push florets to the middle of the pan and pour sauce over them. Toss until they are fully coated. Return florets to the oven for another five minutes or until desired crispness is reached.

Add to a blender:

Juice from one lemon