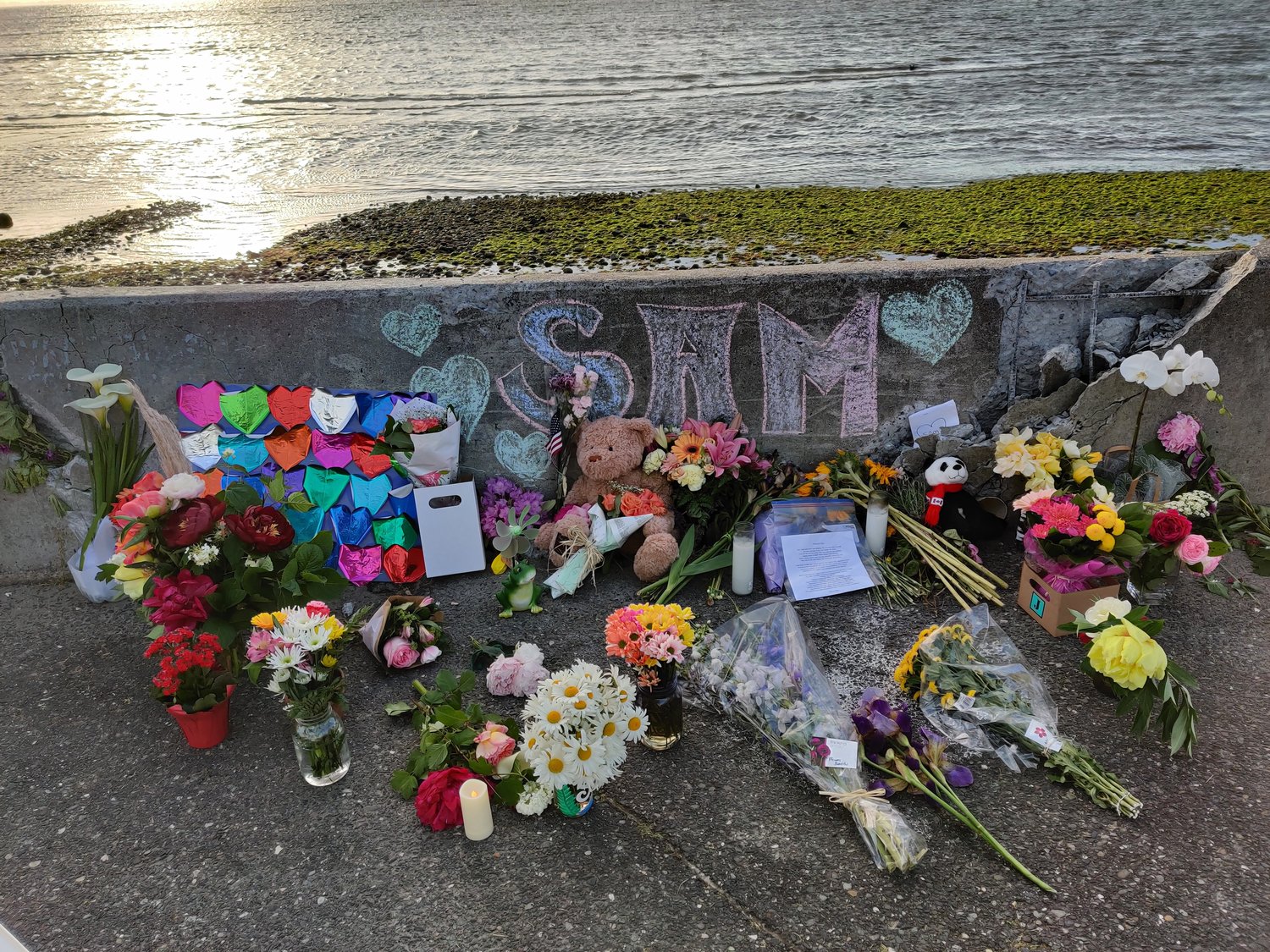 A memorial wall was set up following the fatal accident at the Maple Beach sea wall.
Posted Thursday, January 6, 2022 2:54 pm
By Pat Grubb

A combination of driver inexperience, high speed and alcohol resulted in the death of Samuel Morson in a single-car accident last June at Maple Beach, according to the results of a Washington State Patrol investigation.

Morson, 18, died after crashing into the Maple Beach seawall at the corner of Bayview Drive and Roosevelt Way on June 1, 2021. Driving his grandfather’s Tesla 3, he had driven from his family’s summer cabin starting at 9:08 p.m. According to a Tesla cloud database, at 9:17:14, the cruise control was increased from 22 mph to 90 mph (at which speed, Teslas are engineered to disable auto-drive features including auto-braking and cruise control) with the throttle applied at a maximum 100 percent. At 9:18:17, or 33 seconds later, the Tesla slammed into the seawall at a speed of 138 mph. No brakes were applied and only a slight steering input to the right was indicated. Depending upon the model configuration, Tesla 3s have a top speed in excess of 155 mph.

The corner of Roosevelt Way and Bayview Drive has a suggested speed limit of 15 mph.

Immediately following the collision, a number of bystanders including three off-duty Delta firefighters and a Vancouver police sergeant endeavored to help the driver who was trapped and unconscious. Soon thereafter, 10 Point Roberts fire department personnel attended the scene as did two Delta fire department units with nine firefighters as well as three officers each from Delta Police and the RCMP. Using the jaws of life, Point Roberts emergency personnel extricated the young man from the car which was emitting white smoke. After CPR was administered and vital signs of life were restored, Morson was airlifted to St. Joseph PeaceHealth Medical Center in Bellingham. He later died around 4 a.m. on June 2.

According to the Whatcom County Sheriff’s Office incident detail report, a “preliminary blood alcohol test [of Morson] resulted in a 0.09 BAC (blood alcohol concentration).” As per the Revised Code of Washington, the autopsy report on Morson was redacted in toto.

“This appears to be caused when a young man with minimal driving experience, and some alcohol in his system, making a decision involving excessive speed that came to a horrible conclusion costing Samuel Morson his life.”

Morson would have turned 19 on August 12.

Show your appreciation to volunteers